CBR is reporting that Canadian artist Clement Sauve died on Wednesday. That name probably doesn't mean anything to you, but you may know his work: 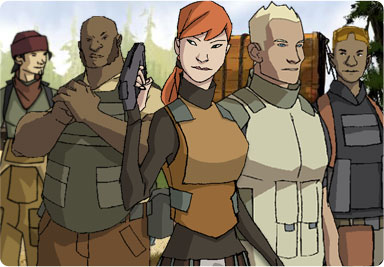 That's right, Sauve was the character designer for GI Joe: Renegades, the new cartoon airing on The Hub. And while the first art we were shown was, quite honestly, less than stellar, the show itself is well done and all the characters look great. We're glad that Clement lived long enough to see his designs come to life, but as we watch the show, it's sad that we'll never see more in the same vein.

Imagine if Bruce Timm never made it to Superman or JLU. If Sean "Cheeks" Galloway stopped after Hellboy and never did Spectacular Spider-Man. If Derrick J. Wyatt ended his work with Teen Titans, without ever giving us Transformers Animated or Scooby Doo Mystery Inc. It's the potential we'll miss out on, and that's enough to make you miss the man, even if you've never heard of him before.