Since everybody is talking about the new Thundercats cartoon, online retailers are taking advantage of the hype to post all the stuff Bandai will soon be putting out:

4 Inch Action Figure Line: Based on the ALL NEW ThunderCats animated adventures as seen on Cartoon Network. Crafted with 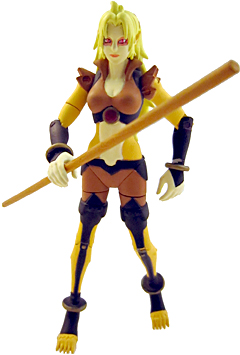 great detail and quality, collectors and kids can play or display their favorite ThunderCats Heroes and Villains in their own environment and recreate scenes from the TV show. All 4" figures include an embedded magnet in the figure for interaction with multiple SKUs across the line, activating unique features. Each of the 4" figures comes with a weapon and/or accessory that is unique to each character. MSRP should be around $7.99 each. Series 1 will include the following figures: 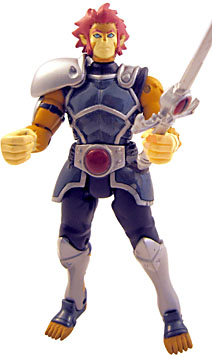 Deluxe 4 Inch Action Figures: Each of these 4" Deluxe Figures utilizes the embedded magnet to unlock unique actions! Each figure comes with a base and/or accessory. Series 1 will include:

Basic Vehicle with Figure Series: Roll into battle with these ALL NEW ThunderCats vehicles. Each of these vehicles comes with a semi-articulated figure (with embedded magnet). The Bikes can combine with the Deluxe ThunderTank for added play. Unique Actions and features activate with magnet. Basic 4" figures can also ride and play with basic vehicle. Series 1 will include: 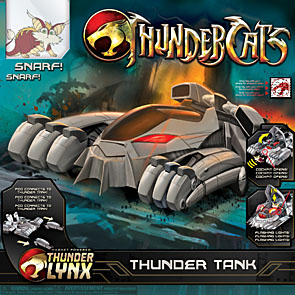 6 Inch Collector Action Figures: Based on the ALL NEW 2011 ThunderCats animated show! Each of these 6" figures includes 18 points of articulation and comes with each characters iconic weapons. Series 1 is set to include:

8 inch Classic Collector Action Figures: Based on the classic 1980's animated ThunderCats cartoon! Each of these 8" figures includes 18 points of articulation and comes with each characters iconic weapons. Series 1 is to include the following figures:

That big figure looks pretty decent, huh? Hopefully he won't actually be 8" tall, so we can integrate him with our MOTU Classics toys. Interesting design on the thigh articulation, as well: the large leg muscle seems to extend over the swivel, which would help hide it when the leg is turned.

This entry was posted in Bandai, commentary and tagged Thundercats. Bookmark the permalink.