From creating toys to creating makeup

Did you watch the first season of SciFi Channel's Face Off? It's a reality show in which movie makeup artists compete for a prize package including a year's supply of makeup and an opportunity to work on a real film - for instance, last year's winner has been working on The Hunger Games. The show's cooler than our lame description makes it sound, even if it does suffer from the same flaws as all reality tv (manufactured conflict, selective editing and way too much repetition).

Anyway, look who's on Season 2: 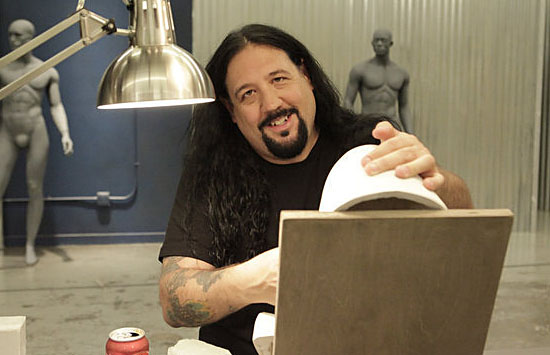 Here's his bio (and his audition video) from the SciFi site:

This toy designer left the special effects industry ten years ago when he became disenchanted and burnt-out from working on low-budget horror films. He now feels ready to return to the trade with renewed energy. He left an abusive home life in Ft. Lauderdale, FL at age 18 and traveled to California, where he lived in his car for several months while trying to find his way. After overcoming such adversity, Jerry has the resolve and desire to one day own his own effects shop, living up to his high potential. His industry idols include Dick Smith and Rob Botin.

It was really surprising to tune in to the first episode and see someone we know walk into the studio. In fact, Jerry was the first person in the industry we ever gave a business card to, and one of the first to pay us any attention, so we definitely consider him a friend of the site.

Face Off is on every Wednesday at 10pm (and again at midnight), so tune in and cheer on one of your own.

This entry was posted in news, SOTA, videos. Bookmark the permalink.

3 Responses to From creating toys to creating makeup