By this point, pretty much every G1 Transformer has been referenced, revamped or otherwise updated. There are a few surprising holdouts, however.

Trailbreaker was a 1984 Autobot, so he's one of the first. His Tech Specs 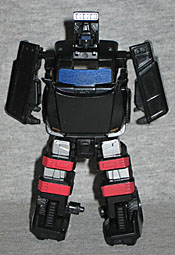 described him as a practical joker, but also the slowest, most gas-guzzling member of the Autobots (probably because his robot looked so chubby). This release maintains those proportions, with a big "gut" and really thick legs. He has two raised red stripes on each leg, like the original toy sported. His head is a blend of the toy and cartoon designs: the toy had an angular head with a large visor as the only facial feature; the cartoon gave him a face, but put it on a plain square head. The modern interpretation of that is to use the shape of the old toy's head as a helmet, and put a full face (with visor) inside that. A silver device with three circles arranged horizontally is immediately above his head - this represents his force field generator, which used to be a separate accessory but is now molded on.

The original toy changed into a Toyota Hilux pickup - a truck which you may know better as the Toyota 4Runner. This one just turns into "a truck" with no specifically identifiable features. It's still a black pickup with a camper cover on the back, but the proportions are entirely different: it's very wide and flat. While we get silver apps for the grill and bumper, golden headlights and a blue windshield, that's it for paint: he lacks the '70s-tastic red-to-yellow stripes of the original.

Hasbro has tried several times to create a new version of Trailbreaker, but they've all fallen apart somewhere along the line - part of the problem is that they couldn't get the rights to his name, which is why this toy is technically called Trailcutter. Whatever you want to call him, it's nice that he finally has a foot in the modern world.