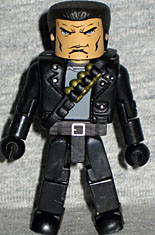 This is pretty much the most generic T-800 possible, and it's a TRU exclusive? What sense does that make? Everybody wants the plain version of the movie hero! In NECA terminology, this figure represents the Cyberdyne Showdown scene, so he's wearing the movie's iconic costume and has no sort of battle damage. The colorscheme isn't very thrilling, honestly: solid black arms, solid black legs, a dark belt and a grey shirt. He's wearing a leather jacket (not the same mold as the Flashback T-800 jacket) and has a separate bandolier slung over his chest. There are still four grenades in there, just waiting to be fired at someone.

The name "Assault Gear" T-800 doesn't really have much to do with this figure, since it's not like he really has a lot of specialized "gear" that he wouldn't have otherwise. What he does have is a cool Minimate minigun. it's designed really well, and the figure looks badass holding it. If you're willing to bend the arms a little bit, you can even get it into both hands at once. No wonder he's got a little smirk painted on his face! 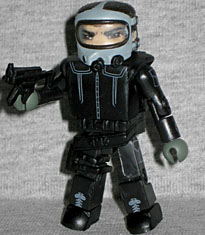 Arnie's opponent in this set is one of the SWAT Officers who responded to the break-in at Cyberdyne. It's not one of the ones who get shot outside, but rather part of the crew that stormed the building. How can you tell? Because of his gas mask. It's molded from clear plastic, then painted everywhere but the area directly over the eyes so he can see out. He's got a bulletproof vest that's thick but not too bulky, and has a fancy double belt and a holster on his right leg. His gloves are grey, and there are grey lines creating the laces on his boots, the lines on his vest and the pockets on his arms and legs. He's armed with an HK94A modified to resemble an MP5. The face is fully painted beneath the mask, but the set includes no hair to replace it.

It's strange that the "plain" T-800 was a store exclusive, but the gun is awesome and the SWAT Officer is the kind of character that will look right at home with almost any Minimate collection.