After little more than four hours of sleep it was time to finish packing up the multitude of purchases, load up the old Rustin-mobile and get down to the Convention Center before parking disappeared. Turns out I didn't need to as the entire downtown area had a palpably lax, if not hung-over, aura. I ended up hanging out in my car, keeping my phone charging, until the Hall opened (no rush for exclusives for me this day) before making my way through the comparably barren streets. 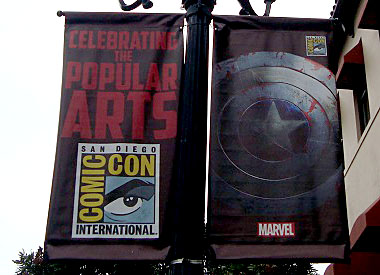 The structure I was parking in had me pass the "Godzilla Encounter" building every day, and as I passed it today I noted a VERY short line and no obvious tickets, so I figured what the heck and "inquired within" - indeed all you needed was a badge, so in I went! It was a fun, novel thing. You load into a "Tokyo Alley," complete with noodle bar and local patron. They had a (presumably) replica of the Anti-Oxygen bomb from the original film and the actual "Millennium" costume used in two films - awesome! At the far end was a cool "Godzilla Museum" with a bunch of figures of the big guy, including a maquette of the new one - not what I expected but gotta say I really dig it! After 5 minutes or so sirens went off and Evac guys rush in and move you to a "Command Center" (photos no longer permitted) where you're encouraged to push buttons and flip switches to help in the Godzilla Watch. They then load us into an "elevator" (big room with trembling floor) to get us to safety on the roof. The elevator "breaks" and we get off on the 25th Floor into a generic office whose large window is actually a screen past which Godzilla walks twice (and we're about at eye level with him [it just occurs to me now that that's why they specifically called out the 25th floor - to tell/show us the scale/height]). All in all it was a novel little thing - cute and fun. 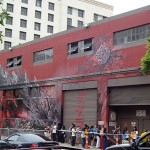 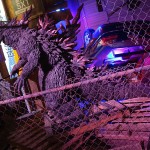 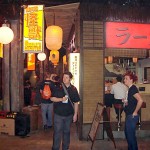 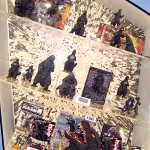 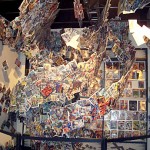 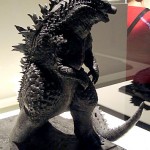 While I sat in the car earlier I had read up on all the reveals from Hall H the previous day, and I have to admit that I'm kind of bummed I wasn't in there. The Godzilla teaser sounds AWESOME! I think it's ingenious that there are other monsters in the film, and was never an angle I'd thought of. I really hope that does mean they're going with the "King of Monsters" angle for him, cause that would be bad ass! I also read up on the Marvel stuff and I have to say... I'm now obsessed with Guardians of the Galaxy. The description of the footage and performances mixed with the cast and that awesome concept art poster... man, it's hitting me like a ton of bricks! I didn't think I was capable of getting excited for movies anymore, but this one has me super jazzed, at least at the moment. I was excited to see the reveal of all the costume bits at the Marvel booth, though I do have to say I'm a little bummed they've moved away from the Steam-punky aesthetic for Star-Lord's helmet and, moreover, I kind of hate the Nova costumes. From the neck down they're alright but those helmets look dumb and drop the best/most unique details from the comics (like the color!). 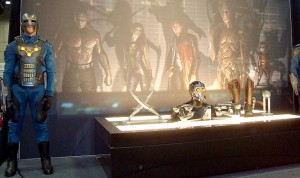 There was very little on my docket for the day, so it was mainly just a casual stroll all about the hall looking for deals, things I'd missed or things freshly put out. For instance, Hasbro had to wait till after the movie panel to put out some of their new figures. I think most everything they're doing for Marvel next year looks good, especially the 6" movie figures. 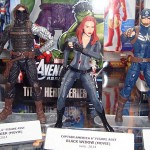 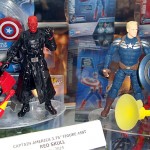 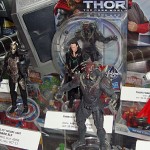 One of the booths I stumbled across was I-Mockery's. I'd attended a friend of a friend's "Guide to Comic Con" panel back in, like 2010 I guess, and they'd recommended everyone go check out this booth selling an awesome 8-bit poster full of 80s references. Well, I did and I fell right in love with it! I was bummed that I never came across them again, and that was all multiplied when I saw that they had indeed done a new poster for every year! Even cooler, each was themed to a season: 2010 = Summer, 2011 = Winter, 2012 = Fall, 2013 = Spring. I quickly rectified that hole in my collection and bought a full set. I had a great chat with Roger, the man behind the site and the art, and I wholeheartedly recommend checking out his site based solely on his in-person coolness and his incredible posters (plus it looks like a neat blog, too)! (It turns out he's part of Tournament of the Nerds which I've heard a lot about and will now definitely have to go to one of these days!) 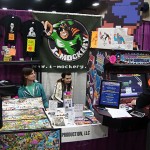 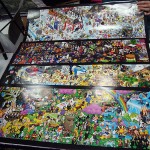 I only went to one panel today, Diamond Select Toys: The Best of All Worlds, which is a mighty fine lead in to my thoughts on DST's reveals - in a word: great! I was pretty shocked to see them pick-up Sin City and Pulp Fiction but am jazzed to be getting Minimates from both! I'm also really into the new Van Helsing figure that Jean St. Jean designed and sculpted for them, I just hope this doesn't mean the end of the Universal Movie Monsters line! They showed off a Hartigan figure as well as Thor and Jane Foster (why Jane instead of the awesome Dark Elves?) from the new movie, but photos weren't allowed, alas. The Thor figure look remarkably good and have cool, connecting stone bases while the Hartigan is good, but really the only thing it does better than the NECA is have good articulation. They also had some of the new Aliens Minimates on display and they look great! The Warriors may have a uniquely sculpted torso, which I'm none too crazy about (despite arguing that'd be the best way to go with Battle Beasts [which I still believe, it's a really a matter of trying to make B.B. stand out on shelves and be something more "new" and "unique" - but this is all neither here nor there]). Speaking of which, they did have the second series of Battle Beasts on display, which seems to play up the novelty of the line with some fun stuff like a Bear, Shark, and Moo Cow. The BIG Minimate news is the return of Marvel Zombies, which we'd heard for a long time Marvel was not allowing, in the form of a villains 4-pack - too cool! Oddly enough I completely forgot to check out the new Select Silver Surfer, but I will concede that the new movie Wolverine looks very good in person. I would have really preferred they'd done him in the black suit and tie, as I have no interest in half-naked Jackman, but the sculpt and articulation look great and the likenesses look dead on. 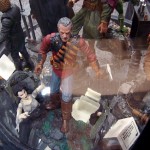 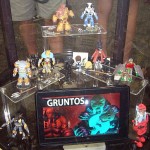 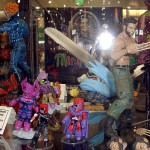 I stopped for lunch at a big parking lot on one of the main drags which had housed a mini-golf course and a big inflatable Axe Cop to hype Fox Animation and a weird rowing challenge for the Vikings show. Fox had a big yellow food truck there all week and I discovered while passing today they were handing out free slices of (pretty decent) pizza - lunch solved! What's funny to me about Sunday is that it's pretty obvious everyone has quit by then, case in point - that parking lot was in the final stages of being cleared of all its festivities. I really can't help but wonder - what becomes of these things? It's not like they're cheap or that there's a myriad of other conventions they can be used for. Just one of those many SDCC/corporate marketing mysteries. 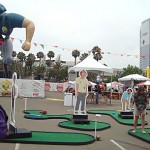 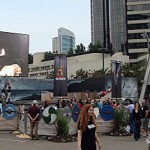 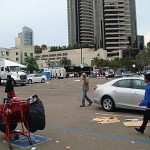 After the DST panel, I spent another hour bargain hunting to little avail before heading up to my traditional 'last dinner in town' at Fred's Mexican Cafe. I was joined there for another long dinner with another friend from college and much fun was had. This SDCC had an awful beginning for me, a mediocre middle and a fine ending. Hasbro willfully ruined SDCC 2013, but if one were to accept that (and I'm not saying I do) this the rest of the show was pretty good. 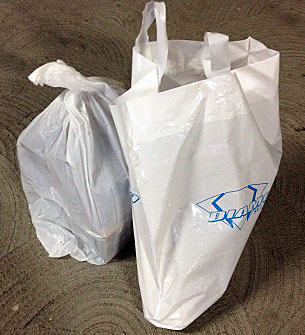 This entry was posted in DST, Hasbro, Marvel, SDCC and tagged Godzilla, SDCC 2013. Bookmark the permalink.