Hasbro being sued over SDCC exclusives

No, not because the massive fustercluck that was their distribution this year; something much stupider. 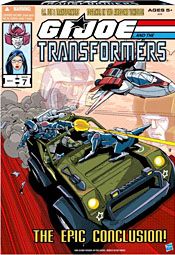 "Harmony Gold" may sound like a stripper name, but it's actually a production company - a production company best known for "creating" Robotech in the '80s. We put "creating" in quotes because, as you know, Robotech was pieced together from three unrelated anime series: Super Dimension Fortress Macross (1982), Super Dimension Cavalry Southern Cross (1984) and Genesis Climber Mospeada (1983).

Another thing you may already know is the history of the Transformers character Jetfire, which is itself deeply intertwined with Macross. And this year at SDCC, Hasbro's "GI Joe and the Transformers" exclusive included a Skystriker jet mocked up to look like Jetfire.

So now Harmony Gold-USA is suing Hasbro, claiming that the set violates their copyrights. It sounds stupid, since the Macross Super Valkyrie toy was used as Jetfire back in G1, but remember that the comics and cartoons never used the Macross design: they both used a modified jet that looked nothing like the toy. So while this lawsuit may seem frivolous, it's not entirely without merit.

Just watch out when the scalpers catch wind of this, and start marking the set as a "rare RECALLED exclusive!" Because there needed to be more demand for this set.

3 Responses to Hasbro being sued over SDCC exclusives