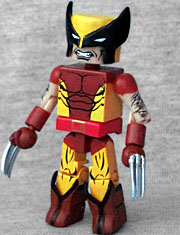 Genetically blessed with accelerated healing, enhanced senses and retractable claws, James "Logan" Howlett has fought in several wars and is now laced with indestructible adamantium, making him the best there is at what he does.

This is our 39th Wolverine, yet amazingly this is only the fourth one in his brown costume. Since the theme of Series 47 is "1980s X-Men," the colors are very vibrant - a reddish brown, and yellow instead of orange. His claws are severely warped! They're curving drastically to the side because of the way they're put in the tray. Plus, the white eyes on his mask are misaligned.Luckily for me he's also got a fuzzy block of hair, and a "pulled back" mask to fit around his neck.

The Brood are a parasitic alien race and frequent foe of the X-Men. They reproduce by implanting an egg inside a host body, 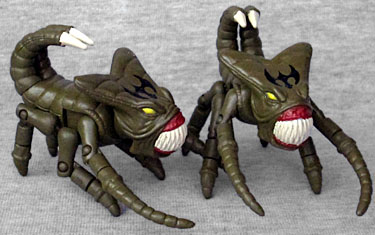 which transforms the host into a new Brood. If the host is a mutant, the Brood acquires that host's mutant powers.

It's always impressive the way Art Asylum uses the standard Minimate body to create inhuman characters. Deep inside this Brood is a normal torso and head, and even the multiple legs are based on typical Minimate arms. The Broods do get four new "hands" to ensure that their legs look pointy and insectoid, and the front limbs have long tentacles. The teeth are highly disturbing. The pronged tails are usually shown to point downward, curling under the body, but toys always turn them up like a scorpion.

Genetically blessed with accelerated healing, enhanced senses and retractable claws, James "Logan" Howlett has fought in several wars and is 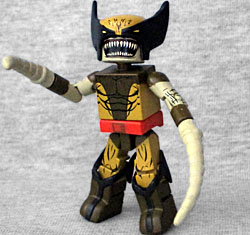 now laced with indestructible adamantium, making him the best there is at what he does.

That's a supremely generic bio for #40. He's the variant for this series, and represents the time Wolverine got infected with a Brood embryo. Well, one of the times. Specifically, the time in Uncanny X-Men #234, because that's the only time the infection got this far. The colors on this Wolverine are darker than on the standard figure, and his mask and bootfronts are new, exaggerated pieces (later reused for Symbiote Wolverine). He has the usual clawed hands, but you can replace them with skin-colored Brood tentacles, for extra creepiness!

Making Series 47 all 1980s X-Men was a strong theme. And if you add in the Havok & Storm exclusive set from TRU Series 14, all you need is Psylocke and you've got yourself a complete Outback team!
Previous