The back-of-the-card bio for today's Gothitropolis Raven review was way too long to include in the actual review itself, but what do we have a blog for if not a place to publish extra information? Here's the whole thing: 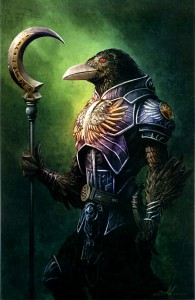 Demons have been crossing over into our world for centuries, fighting an eternal battle over how to exist on our earthly plane. Brothers Decimus and Nonus Hrabban are known to have crossed over to our world at the same time as Scarabus, and are the first members of the Daemothyr family. As founding members of the Order of Lunagoth, Decimus and Nonus are sworn protectors of the Daemothyr children and their family's ancient relic weapons. The brothers' sacrifice has been great, with Nonus losing his life defending the Order's citadel from Scarabus and his minions. Today Decimus relies on his aerial fighting prowess and enchanted scythe to ward off Scarabus and his growing army of evil followers, while still protecting the Daemothyrs and their collection of powerful relics and weapons. Nonus can also be found alongside the Daemothyrs, often taking the form of a ghostly white bird atop Atheria Daemothyr's shoulder.