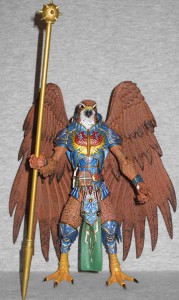 When the Four Horsemen launched their Kickstarter, they had six birds ready to go - the raven, of course, but also five others. Our second variant is "Falcus," based, of course, on a falcon. No one said these names were supposed to be surprising.

Falcus has light brown feathers (if you're buying add-on wings), and his armor is metallic blue outlined with gold. His armor details are dark red, yellow, and darker blue, and his loincloth is green. The variant birds don't get the same ornate weapon as Decimus - just a staff with the spiked mace head on one end, and a sharp spike on the other.

The falcon head is excellent. There's already been one Gothitropolis

crack at a falcon face, thanks to Horos, but this is a real bird, not a stylized take. It still has the large black eyes with the yellow outline, but there are real feathers on the face, not just colored shapes. The paint on the head is matte, with a black drybrushing to make the face match the arms and legs, while the beak is high gloss. And kudos to the Horsemen for including the little "tooth" on the side - falcons kill their prey with their beaks, not their feet (like eagles). 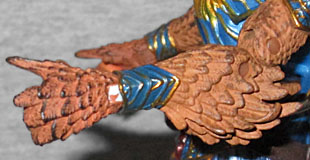 Falcus has a problem that I haven't experienced on any of the other birds so far: the paint on his wrists joints has stripped away entirely, leaving bare white plastic behind. There's also a tiny bald spot on top of his head, like the paint didn't stick to the surface of the plastic adequately.