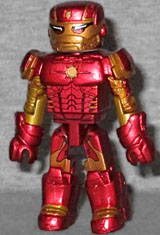 Realizing that Earth will always face threats from outer space, Tony Stark develops a new suit of armor that allows him to explore the galaxy, eventually joining up with the Guardians of the Galaxy.

Look, it's the armor that nobody wanted as a Marvel Legend! It's back! In Minimate form! He has Mark VII boots, Mark V arms and Mark 42 gloves, while his half-chest cap and stupid helmet are new. The paint masks are unique, but exist only on his front: the sides and back are plain (metallic) red.

His helmet is removable - the back of the packaging specifically calls that out for both him and Spider-Man, so... good for them? Wolverine's mask comes off, too, but we don't hear a word about that. Some of the red has transferred to his face, but not as bad as some we've seen. The set includes a yellow blast-off base.

The leader of the alien race known as the Kree, Ronan the Accuser is judge, jury and executioner in one, delivering punishment with his massive, 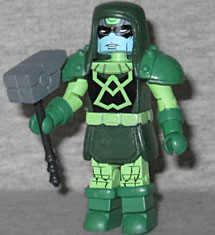 Space Iron Man and Ronan the Accuser were both choices in the latest TRU Minimate box set poll, so I guess that tells us who the winners were. I don't even remember who I voted for. Ronan's looking pretty impressive in his green costume - this is a more vintage look than the version seen on the ML Build-A-Figure, with a geometric shape on the chest and larger shoulder pads. The pads and hood on this toy are the same piece, and having it in place forces his head to tip backwards - ie, making him look more regal or haughty. Surprisingly, his hammer isn't the same mold the movie Minimate came with: Art Asylum designed an all-new piece.

Of the six figures up for the box set vote, Ronan was definitely one of the better ones. So while we wait for that box to finally show up, I'm glad he didn't make the cut - better to get him now, even if he does come with a lame Iron Man.

This entry was posted in Art Asylum, Marvel, MMMR and tagged Guardians of the Galaxy, Iron Man, Minimates. Bookmark the permalink.