The Avengers 2: Guardians of Ga'Hoole Minimates have begun showing up at Toys Я Usses (the direct market versions shipped a few weeks ago). 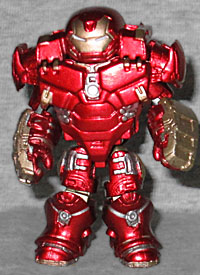 Tony Stark always plans for the future, and he created the Hulk Buster [sic] Iron Man armor as a means of subduing an out-of-control Hulk.

Well, he didn't create it alone - this isn't like the comics, where he built it in secret and sprung it on Hulk as a surprise, this suit was built with Bruce Banner's help and input. To create the suit's massive size, he has lots of sculpted add-ons: new boots, big thighs, huge gloves, shoulder armor, and a chest cap that's almost as wide as it is tall. This is definitely a Minimate that looks bigger and meaner than the average.

In the film, the Hulkbuster armor is worn over Tony's normal armor, and the Minimate duplicates that. The head and upper shoulders hinge up, revealing the normal Minimate head painted with the details of the Mark 43 armor. Ditto to the torso block, if you choose to take the chest cap off. You can't turn this into a plain Iron Man, though, because the arms and legs are undetailed.

While the Hulk is normally a bright green color, a new grey version 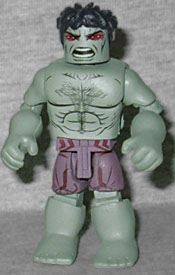 comes to the forefront during a battle with Ultron. Is it friend or foe?

Eh, foe probably. Of course, this is all hypothetical, since it never actually happened. The plan was originally to have him turn grey when Scarlet Witch gave him the whammy, but they decided to leave him green (though not the usual green seen in the films - the tint was a bit more red). This Minimate kind of splits the difference between true grey and the color used in the film, making him visually distinct from all the other Hulks, but still clearly the same guy. He's wearing his Avengers-logoed technopants, and his eyes are red and blurry. Has Hulk been crying?

The Hulkbuster armor isn't quite as large as it should be, because that's kind of unfeasible, but it is taller than the Hulk Minimate, and that's what matters.