Some Mystery Minis are fine by themselves - others get better with a partner.

Whether you consider the Alien or the Predator a better movie monster depends on what you want: do you prefer a dumb animal (that can somehow cut the power), 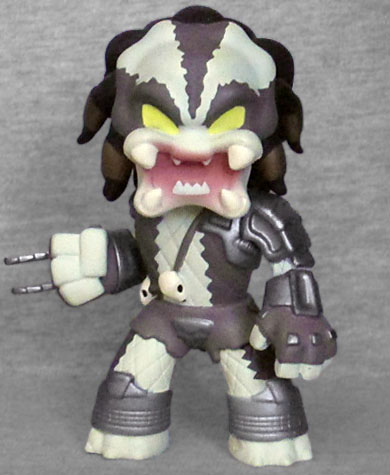 or do you like an enemy with malicious cunning? Man against man or man against nature? At the end of the day, facing the Predator is the same as facing a man - it thinks, it reasons, it uses tools, it has a culture - while fighting xenomorphs is a jumped-up version of Liam Neeson: Wolfpuncher.

This Predator is from the first movie. He's yellow and tan, rather than being orange, and his armor is limited to greaves around his shins, a crotchplate, and a bit on both shoulders. The wrist-blades are extended from his gauntlet, there are metal studs on his knuckles, and they even remembered the extra toe on the back of his foot. His trophy skull sash is sculpted on his chest, and a diamond pattern sculpted into his legs, torso and left arm suggest his netting. Its not painted, but that's probably for the best.

Maybe it's a result of all the cool Predators NECA has given us, but this one just doesn't grab me - I like the design, it's just something about the paint 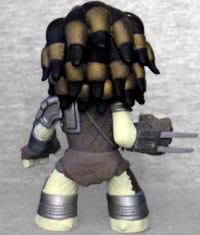 that leaves me cold. Is it the pale, pale yellow? The way the brown is just big jagged stripes? I don't know. His dreadlocks are really cute, though.

There are three different variants of the Predator available: a 1:12 regular version; a 1:24 "bloody" version (which really just has a few small drops of green paint, nothing amazing); and a 1:36 clear version. Really, Funko? You had to fill up the boxes with all these Predators? You couldn't have, say, increased the rarity of those, and made it easier to find the 1:72 Rocketeer or Mars Attacks Martian? Or how about replacing the open-mouthed face on this one with a mask? Do the normal figure masked, make a 1:36 unmasked bloody version, and then leave the masked-and-cloaked one at 1:72.

But himself, the Predator is fairly unimpressive. But put him next to the Alien, and suddenly he gets a lot cooler. But if you really want to impress us, Funko? Be like NECA, and do the entire Lost Tribe. 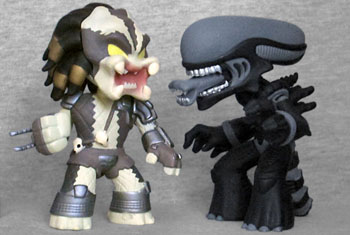