I'm well aware of the irony in using the Joker to illustrate the "two-face theory," but I've used it with him more than anyone else. It's [...] something I like using with the deranged characters to give them a quirky sort of expression. 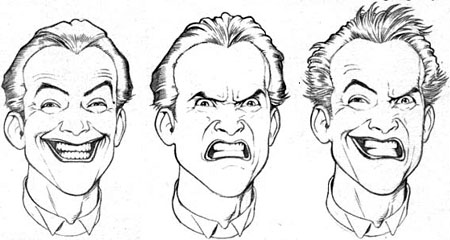 It's real easy. Take a shot of the happy Joker and paste it together with him furious. Check out the results by placing your hand over one side of the third illustration, then do it to the other side. Get it? It's kinda fun. Now try it with other expressions to see what kind of combinations you can come up with.

If you want to see the full tutorial, as well as many others, you can get the How to Draw: The Best of Basic Training book, which includes a ton of useful instruction.

But interesting fact: the art you see above is as it was originally published in Wizard #84; apparently Gareb didn't bother to license DC characters when he decided to collect all these tutorials into a book, so anything that wasn't Marvel or creator-owned had to be redrawn, so Joker became Sabretooth (which is also how, on the page before this example, Blue Beetle and Booster Gold became Hawkeye and Captain America).