The past few years during Horror Month, all our Minimate Mini-Reviews were Walking Dead-themed. Apparently you liked that, because when this year's didn't follow the same scheme, we got questions about why. Well, it's complicated. Because starting with Series 4, the Walking Dead Minimates began doing something very annoying.

The specialty market and Toys "Я" Us assortments had always had two sets that overlapped: as an example, Series 3's Rick and Dexter sets were available wherever you shopped, but Glen and Carol could only be had at TRU, and Hershel and Tyreese were everywhere else, get it? Here, have a confusing chart with color-coded dots: 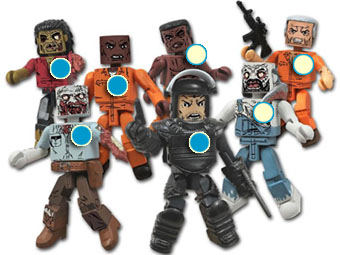 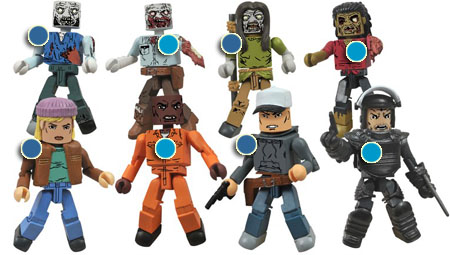 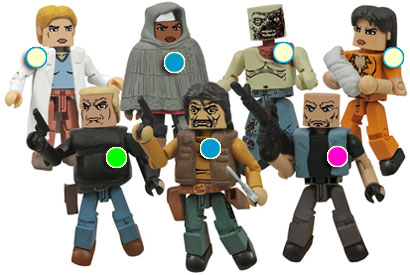 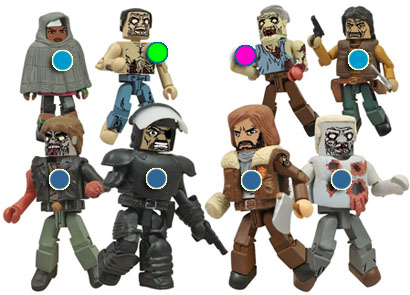 The "semi-overlap" sets in Series 4 weren't identified with the silver Toys "Я" Us exclusive sticker, meaning there was no indication that was the only way to get those particular zombies. So while I grabbed Rick and the Governor when I saw them, it wasn't until long after the figures had sold out that I realized I'd missed some things. And if that weren't enough, all four sets in TRU Series 5 were unique, but again only two had the sticker. Frankly, it's pushed me out of collecting Walking Dead Minimates, because I can't trust the info on the packaging any more...