Well, it's finally happened: I've run out of new Minimates. Luckily, these things have been around forever, and I've got an impressive backlog! 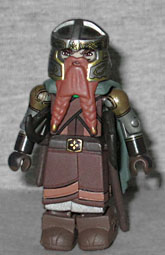 The Lord of the Rings Minimates came out in 2004, back when Minimates were still fully in their cartoony early stage, so Gimli is much less detailed than an equivalent figure would be today, but you can see where they'd be heading soon. His helmet is sculpted in a simple, chunky style (and has his braided beard molded as part of it), but there are complex paint apps for the small details. He's got his green Fellowship cape, and the layered skirts - both very simple - but the boot caps that fit over his feet have sculpted ties that run all the way around. Unexpected! The armor on his arms is painted, as is the upper part of his shirt. They even painted the mud on his gloves! Technically this figure is supposed to be wearing the same outfit as the great ToyBiz one, which just shows you how different the styles are! 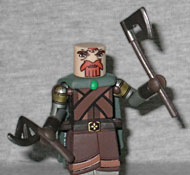 Gimli's got two of his axes, both taken straight from the movie. He can hold them in either hand, or store them in the purpose-made loops in his belt. That's nice design! The helmet is removable, and since it obviously takes his hair with it, Gimli's got a goatee painted as part of his face. In other words, "there is no chin behind Gimli's beard; there is only another beard." It's a pretty decent John Rhys-Davies caricature, all things considered.

Since Gimli is a dwarf, he uses the small Minimate body - aka, the two-incher 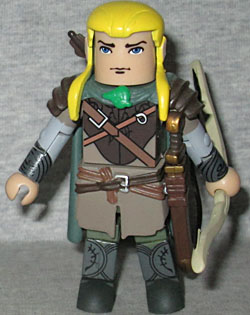 that's standard now. But he's paired in this set with his hetero lifemate, Legolas, and Legolas needs to be taller, so he uses the 2½" body that was created for this line. Like Gimli, he's an archaic combo of simple sculpt and (burgeoning) detailed paint. His skirt is molded with two belts wrapped around it. His cape has attached shoulder armor and the leaf brooch, plus his quiver and his two sheathed swords. His chest armor, bracers, and boots are just done with paint. The likeness here is kind of awful: the tubular Minimate head does not suit Orlando Bloom's narrow features at all. His hair is a new piece, falling over his shoulders and featuring a braid in the back, and the pointy ears are molded as part of it. They really should have painted the skintone onto the fronts of the ears, though, so that they appeared to join his face rather than floating free. 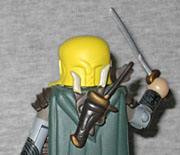 Legolas includes his bow, naturally - off-white with a black string - plus a sword in a real working scabbard! It's the one he got in Rohan, matching the armor he's wearing, and the scabbard plugs into his left hip. Since the LotR Minimates came out at the same time Art Asylum was doing the C3 thing, they have Lego-stud-sized holes in their feet, and they all came with clear flat bricks to use as display stands.