The way the bio for today's Wonder Woman figure calls her a "warrior princess" just reminds us of the fact that DC Comics once planned to publish a Xena/Wonder Woman crossover. Tentatively titled The Princess War Diaries, the story was going to be a light-hearted romp, much like the Xena TV show. But then the show ended, and Dan DiDio wasn't crazy about the idea of one of DC's "trinity" being used for humor, so despite the fact that the book had been approved, the script had been paid for, and the art was underway, the book got the axe. What a loss!

Things are slow. There are no current wars. Ares—The God Of War is bored.

One evening in between inflicting his irritated behavior on those less than him, Ares decided to "portal surf" to ease his boredom. While surfing through the different times and dimensions Ares comes Earth in current time where he finds Wonder Woman and Wonder Girl in a training session. Ares is attracted to this scene for a couple of reasons. One being that the Wonder Woman and Wonder Girl remind him of the Xena/Gabrielle relationship and the other reason being that Wonder Woman ain't bad to look at.

The idea to stir the bucket of ox manure and see what happens interests Ares a great deal. He favors pulling Wonder Woman and Wonder Girl into Xena's time and world. It appeals to him to cast out rumors that a warrior princess and her younger partner are wreaking havoc and mayhem on innocent villages and their people for no other reason than it's a bad time of month to be in their way. He chuckles at the thought that he will have his own goons do the real damage and destruction leaving signs and more rumors that it was the two women warriors that did the dirty deeds on these poor folks. It excites him to think that by doing this it will guide both Wonder Woman and Wonder Girl to seek and hunt out these two that are throwing donkey dump on their good names. Xena and Gabrielle seek to do the same.

Ares loves the idea of Wonder Woman and Xena doing battle in what he bills as "Warrior Princess-Wet Tunic-Mud Battle-To The Death-Pay-Per-View-Extravaganza." He figures all the Gods will tune in for this and he will no longer be bored.

A little more Tabasco sauce is thrown into the mix when word of these two destructive divas that are tearing up the countryside reaches the male dominated city of Testosterone. This city is run by Bolos, the most manly man in all the land, the most massive male chauvinist pig ever to burp out ale and slap a serving wench on the ass. Bolos is a large powerful man, an incredible brawler that can withstand huge amounts of pain. He never admits to being wrong, defeated or needing directions. He has a very hairy chest and never wears a shirt no matter what the weather. Bolos decides that these two women need to be tamed and shown their true place in a man's world. So he and his army of knuckle draggers go in search of these liberated ladies of war.

What we get is a knock down, drag out battle between Wonder Woman and Xena along with Wonder Girl and Gabrielle as the under card fight. There is also the added attraction of Bolos, his men and a trio of female mercenaries that decide their title as the toughest women has been challenged. All of this because Ares and his buddies are bored.

At one point in the story we'll have Wonder Woman wearing Xena's outfit and Xena wearing Wonder Woman's. Why? Because it's too good not to happen.

This is a story of friendship, loyalty, action, humor and respect that is learned and earned.

Come the heck on, DC! How could you say no to that?!

Here are a few pages, complete with the attendant script: 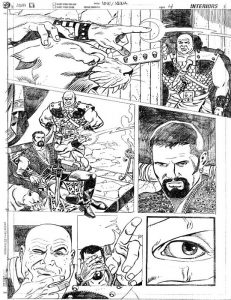 Panel One:
EATON: Ares, Was that the call to battle?
SFX: (Ares finger) Viiip! Viiiip!

Panel Three:
ARES: Not even a pillow fight between buxom village girls.

Panel Four:
EATON: The boys and I could burn a couple of villages, or maybe pummel some hapless goat herders.
EATON: OR...We could just fight among ourselves for a while. Would that work for you? 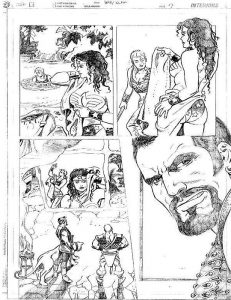 Panel Three:
ARES: Oh, this'll be perfect.
ARES: Who do these two remind you of, Eaton?
EATON: I know of who you speak, Ares...
EATON: Trouble. 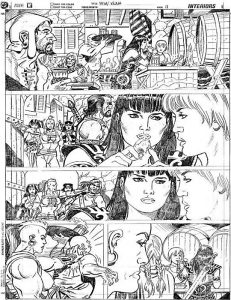 Panel One:
GABRIELLE: Xena, I thought you were going to start eating healthier food?
GABRIELLE: That chicken leg has died, fried and been bathed in a ton of really bad lard.
XENA: Mmmm, huh.
XENA: I take it you're attempting to beat me over the head with some sort of point, Gabrielle...
XENA: One I'm not interested in hearing at the moment.

Panel Two:
GABRIELLE: You know I'm right. You said you were going to start eating more salads. Where's that motivation?
XENA: Hmmph...
XENA: Grass. Weeds. Rabbit food. You have to eat meat now and then to keep up your aggression level, Gabrielle.
XENA: That's important too. 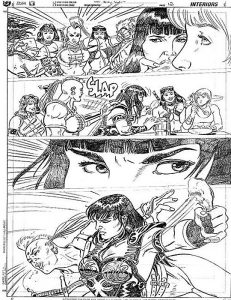 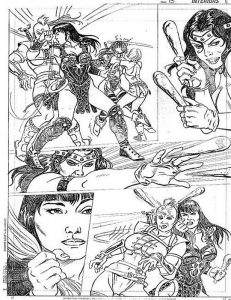 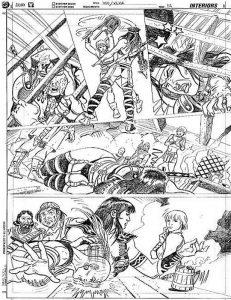 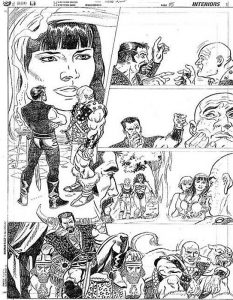 Panel One:
ARES: Okay, all the major players are in position.
ARES: Eaton, I need you and and the boys to do a little... "cross-dressing."
EATON: Huh??

Panel Two:
ARES: Cross-dressing... you know... you and the horde are going to be women for a little while.
EATON: Women??
ARES: Yes, women.
ARES: Xena, Gabrielle, this Wonder Woman and Wonder Girl to be exact.

Panel Three:
ARES: Now don't get your panties all in a wad...pardon the soon to be pun.
ARES: I'm going to throw a temporary illusion on you and the horde. You'll be you, but everyone else will see you as these women.
ARES: All you have to do is wreck a few villages and torment some farmers... You know... be yourselves.

Panel Four:
ARES: They'll get the blame. Word will spread of these rampaging Amazons and their Tinkerbell sidekicks.
ARES: They'll start looking for the imposters, I'll make sure they meet, a large chaotic cat-fight will ensue... maybe some clothing will come off...
ARES: And we'll all gather here with food, wine and women of uncertain morals.

This could have been a really fun book, if only it had seen the light of day. But DC's gone through a couple reboots since then, the Xena license has changed companies, and Eduardo Baretto sadly died in 2011, so the odds of it ever becoming real are almost zero. But if Chinese Democracy could finally happen, who's to say?

This entry was posted in addendums, comics, DC and tagged Wonder Woman, Xena. Bookmark the permalink.