Voltron itself doesn't have a pilot, so in conjunction with today's review, here's the official profile of Princess Allura: 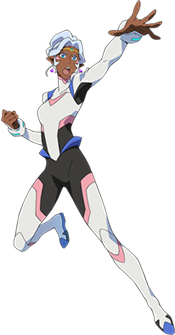 Often all business, Princess Allura is a whip-smart alien princess. Allura is the daughter of King Alfor, the original creator of Voltron. Allura has emerged from a 10,000 year cryogenic sleep to guide the team to defeat Zarkon. Often feeling the weight of the universe on her shoulders, she feels personally responsible for the success or failure of the new Paladins of Voltron.

The modern Princess Allura is more alien than she was in the '80s, though her story is mostly the same (though the 10,000-year stasis is new). In the original Japanese cartoon, she was known as Princess Fara (or maybe "Fala"), and she still managed to look entirely human. In Legendary Defender, Alteans have some shape-shifting abilities, able to change their size and coloring at will.