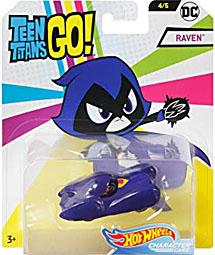 Raven is here to drop it on you even harder.
There's no darker than me/
I'm as dark as can be!
Check it: Azarath Metrion Z-Z-Zinthos!
Teleporting, magical powers... we adios!

Raven is the sarcastic, deadpan demon girl who'd rather be left alone. Unfortunately for her, that's apparently Beast Boy's "type," so he's constantly trying to make time with her. (Which, to be fair, she sometimes encourages - so it's not like he's just some little creep who can't take "no" for an answer. And she gets jealous any time he starts paying attention to Terra.) 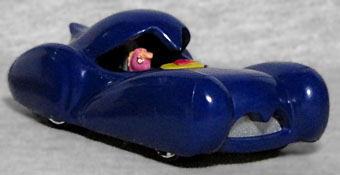 just a kind of smooth, featureless shape designed to suggest her hood and cape, complete with her clasp right in front of the non-windshield. It's... "okay," but not great. The most interesting thing about it is that you can make out Sparkleface, Raven's favorite Pretty Pretty Pegasus toy, sitting in the passenger seat. That's neat, but it still leaves Raven as the weakest of the bunch. Right up until you notice how light the car feels.

If you're overly curious and brave enough 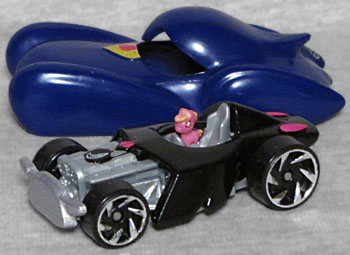 to try pulling your toys apart, you may discover why the toy feels so insubstantial: the purple cape is basically just a car cover, a hollow piece that snaps onto the actual toy beneath it. Suddenly, this is a stripped-down little race car with an exposed engine and a body that's a black bird-shape with some pink shapes representing her belt and her demon eyes. The symbol on the engine is a black circle with the white outline of her hand in it, just like when she's using her powers. And we get a better view of Sparkleface here, too. The toy got a lot better when its hidden feature became apparent.