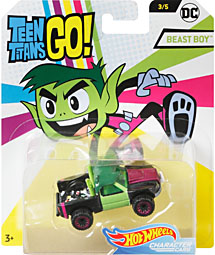 Beast Boy, I can turn straight up into an animal!
"Animal!?"
"Animal?"
Yes, any animal!
Boom! Pow! Yeah, I'm a kitten now!
"Ohhhhhhhhhhh!" Check out my kitten-meow!

With car figure character item #3, we get to the really good stuff! Beast Boy is the best release in this series, showcasing what makes the Character Cars as a whole so dang cool. 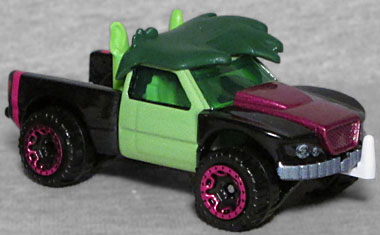 The idea is to create a vehicle that not only conveys the physical look of a given character, but also their personality. So for instance, Obi-Wan Kenobi gets turned into an antique roadster, while Emperor Palpatine is a sleek limo. Stuff like that. So Beast Boy, the most rough-and-tumble member of the Teen Titans, becomes a pickup truck. But that's just the beginning.

The truck is mostly black, with a purple hood (matching his costume) while the doors are the light green of his skin. The patch of darker green hair on the roof 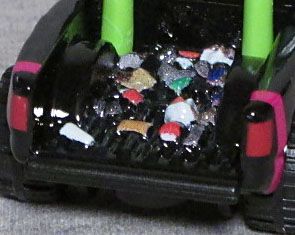 is a bit hard to excuse as part of a normal truck, but it suits the character - and even the exhaust pipes behind the passenger cab come to points like his ears! The truck's front bumper looks like BB's belt. Plus, you know how Beast Boy is always drawn with one little fang poking up out of his mouth? The truck has a single white crash bar sticking up in front. Too cool! The neatest little detail, though, has to be in the back; Beast Boy is kind of a slob, so the bed of the truck is filled with all kinds of (fully painted) trash: cups, fast food wrappers, chip bags, etc. This would have been an okay release without that, but the attention to detail - both in design and execution - puts this one over the top.