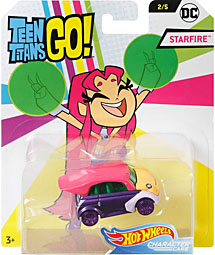 The Star, the fire/
The live, the wire/
The alien princess in my alien attire!
The energy blasts and supersonic speed!
"Is she down with the Titans?"
Oh the-yes, indeed!

Figure #2 is the object of Robin's affection, Princess Koriand'r of Tamaran, aka Starfire. An immigrant to Earth, Starfire tries 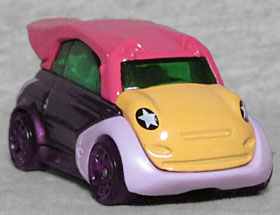 her best to fit in, but that doesn't always work. Her upbeat attitude sees her though, however! Since she's not as tall on Go! as she was on the old cartoon, this line imagines her as some knockoff Mini Cooper.

Star's colors are really captured well here. Her hot pink hair is the car's roof, with a very odd extension sticking straight off the back. Yes, we get that this is a nod to the way her hair points out behind her when she flies, but it doesn't make sense as a car part. The windows are all translucent green,

matching her power blasts and her eyes, and there are two tones of purple on the doors. If the hood is supposed to be her face, though, it needs to be more orange than peach. The metallic purple hubcaps are a very nice touch, however. One thing that doesn't work too well? The stars on her headlights. It makes those look more like eyes than they should, and doesn't really match up with any element of her costume.