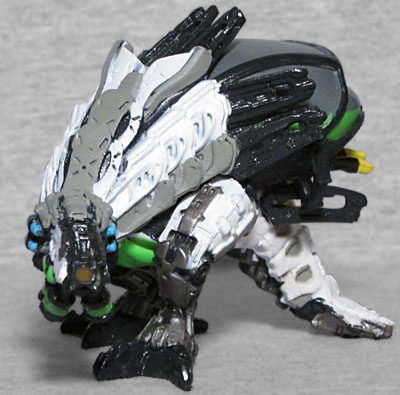 of Horizon Zero Dawn exist in a complex interconnected web of niches and functions. Some do recon, some are terraformers... and some seem to have been built for nothing other than murdering you. The Bellowback is identified as a "Transport" Class machine. Swollen with volatile liquid cargo, it can spray streams of its cargo to engulf enemies, and there are two types of it in the game: one that shoots fire, and one that shoots, uh, freeze. (The idea being they'd work in concert, one starting small controlled burns, and the other on hand to extinguish them if they got out of control.

This Mystery Mini is the Fire Bellowback - if it were 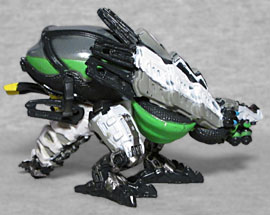 the Freeze Bellowback, its outer shell would be a darker grey instead of this bright white, and the liquid filling its cargo sac and gullet would be blue, rather than green. There's no sense of scale with these figures, but the Bellowback is meant to be about the size of a spinosaurus - which also explains its bipedal, horizontal posture and its long face. Though its tail does hang down near the ground, that's not a cheat to keep it standing: even with all the weight in the back and the way it's curving to the side, it will stand perfectly on its own two feet.