It's not unusual to be loved by anyone for the the Transformers BotBots to reuse molds - that's just a fact of the modern economy, and some of the repaints are very clever, so we don't mind (much). What is unusual, though, is for two uses of the same mold to end up in the same tribe - especially in consecutive series! Why are the Spoiled Rottens so lucky? 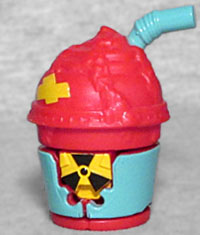 I usually don't specifically try to get multiple versions of a single mold, though I will make exceptions if the BotBots are different enough. You can have a deodorant and a tombstone and not feel like they're two of the same thing, right? So how have I ended up with two sloppy slushes in quick succession? The colors. I got Atomic Freeze because he was (at the time) a unique mold; I got Slimey Slurps because the colors chosen are just so striking! The majority of the cup is an insanely vibrant red, with a cool blue label and straw, and a strong yellow for the nuclear symbol and the crossed pieces of tape on the lid - something we didn't even notice on the first use of this mold. It looks great!

To convert, raise the lid and tip it back, pull the bottom of the cup down, and spread the arms.

Slimey Slurps leaves a slippery, gross trail wherever he goes. And he never helps clean it up! He'll make up any excuse to avoid it. He says he'll clean up "next time," 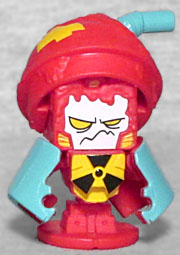 but secretly crosses his straw so he doesn't have to keep his promise.

There are no real surprises with the robot mode, no new colors or what have you. The jagged "hair" on the forehead is even a sculpted element, so not even that is different between the uses of the mold. Sure, he's got a truly sour expression on his face, but that's not a major change. The yellow on his forehead and cheeks isn't as prominent as the art makes it seem, either. Since they were already painting the face white, maybe they should have also used that color for the "bandage" on the cup lid, and moved the yellow to the color of the slush pouring out; yes, it makes logical sense that a clear plastic cup would turn the same color as whatever's inside it, but on a toy you want a little more separation so the details stand out. 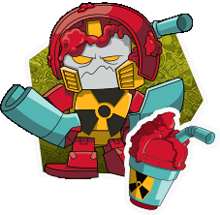 Slimey Slurps is only available blind-packed, as #9, so I had to specifically try to get him; this isn't just a case where I accidentally ended up with two of the same thing because one was packaged with something else I needed.