Since unregulated capitalism has killed the American middle class, department stores are dying. And without department stores to serve as anchors, American malls are dying. What we're saying is, it's not at all surprising the Transformers BotBots mall would have a bunch of discarded, junky food lying around. They're the Spoiled Rottens, and somebody left Atomic Freeze sitting on a table in the ground floor food court. 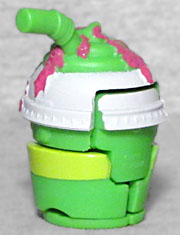 How does a frozen slush drink "spoil"? Like, first of all, flavor syrup doesn't go bad, it just loses its potency; and secondly, if a drink like this sits around too long, it just melts, it doesn't go bad. And after that it would slowly evaporate, just leaving a sticky sugar residue, which also wouldn't spoil. It really feels like they assigned this to the Spoiled Rottens because there were already too many in the Greaser Gang. I mean, a plastic drink cup? Sure, it has a domed lid, rather than flat, and something thick and chunky is leaking out the top, but "spilling" is not the same as "spoiling."

To convert, raise the lid and tip it back, pull the bottom of the cup down, and spread the arms.

Atomic Freeze oozes coolness... literally. It's spilling out of his brains! 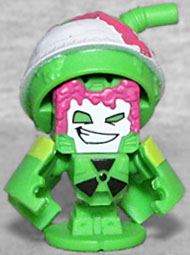 He thinks he's that cool, but he's really a spoiled brat of a bot who is used to getting his own way, and always follows it up with a frosty insult. Freezer BURNED! Ice cold!

As a Transformer, Atomic Freeze feels very reminiscent of Sippy Slurps - so similar that when I first played with him, I was sure I'd already owned the mold. But they don't share any parts, just inspiration. While Atomic Freeze's legs are a single, solid piece, he does get balljointed shoulders now, so that's nice. The pink of the goo running out of the lid is matched around the bot's face - but why does he have a big smile instead of the tongue-out expression from the art? That's cute!

Atomic Freeze is, along with Ollie Bites, is one of the most plentiful Series 2 BotBots: he's blind-packed as #14, in two different Spoiled Rottens 8-packs, or a Swag Stylers 8-pack.