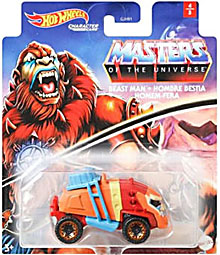 Skeletor's loyal henchman, Beast Man holds power over much of the animal kingdom.

Beast-Man's packaging is the one that really makes it clear these character portraits are new pieces rather than vintage art that's been repurposed: there's just something about the style or the pose that just screams "this was made in the past decade." The coloring is modern, too, but that could have just been remastered, you know? This is new. They already have a new background rather than red rocks, was that not enough of an update?

Now, Beast-Man is a character who makes sense being huge! 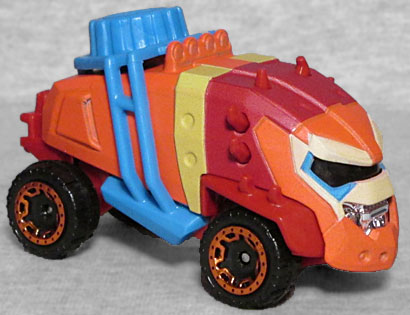 This car is, in fact, a total beast. It's some kind of rugged off-roader thing, not really shaped like a real vehicle but with an intention that's clear. It has giant, chunky wheels (four of them with copper rims and a fifth in a protective carrier up on the roof) and a high clearance so it doesn't get stuck on a log or whatever. You'd probably want the front to be angled up, rather than down, so it doesn't accidentally dig into the terrain and get you stuck that way, but who's even paying that much attention here? Well, presumably Dwayne Vance, since he designed it, but *shrug*.

None of the other cars in this series have as distinct a face as Beast-Mobile does. A lot of the toy is orange, to match his fur, but then the front has a pale pink area for his bare skin and blue spots just around the black windshield, like the stripes around his eyes. Plus, the inset grill is chrome silver, making obvious teeth above his orange beard. A ridge along the roof stands in for the bumps on his head. There's a red section meant to be the fur collar he wears (with soft spikes for safety), a yellow belt, and then a lighter blue bit that is both trunks and chest medallion.