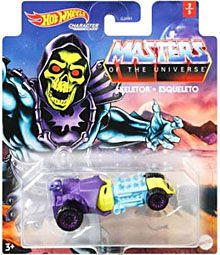 He-Man's primary and most dangerous foe, Skeletor will stop at nothing to seize the throne of Castle Grayskull.

The card art for these Masters of the Universe Hot Wheels Character Cars is not vintage, so we can't tell you who painted this picture of Skeletor, but it definitely has an Alfredo Alcala feel to it. Also, we see here that Skeletor's Spanish name is apparently "Esqueleto," which just means "skeleton," but definitely sounds a lot cooler. 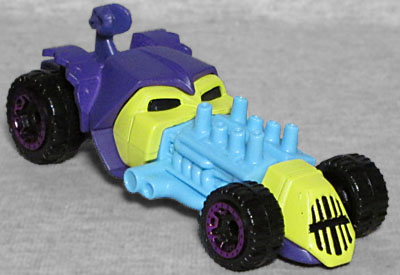 This vehicle is a stripped-down hot rod - you know, the "bare bones" of a car? Yeah. Charlie Angulo strikes again! The front end is narrow, with wide-set black wheels and an exposed engine block, with exhaust pipes that reach out increasingly wider as you move back, easing the transition to the passenger cabin. The rear wheels are larger than the front, but they've all got shiny purple rims.

The fenders over the rear wheels have a scalloped edge to make them look like the bit of decorative armor over Skeletor's shoulders on the human design.

Those and the roof are a dark purple, creating his hood. Yes, the hood is on the roof; that's not confusing or anything. The pale neon yellow of Skeletor's face bones is split between the cab (with the black eyes as windows) and the very front (with the grill as teeth). The original concept would have had his chest harness wrapped over top of the blue engine, but that didn't make the final product. Wonder why? We do still get his ram's head staff sticking out of the back, though.