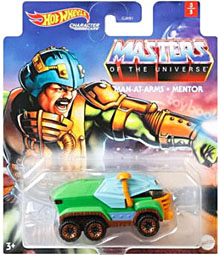 As a mentor figure to He-Man, this master of weapons often demonstrates that power is not the only path to victory.

Ha, "as a mentor". We see you, Mattel. Nicely done. (For those who don't get it, Man-At-Arms' name in Spanish [and probably some other languages] is "Mentor," because that's the role he tends to fill. And after all, there's a difference between a "man-at-arms" - a normal, albeit well-trained and equipped, soldier - and a "master-at-arms," which is what Duncan's job seems to actually be.)

This is a massive brute of a vehicle, 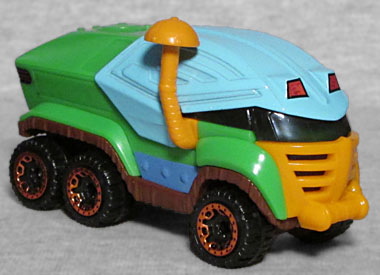 but does it need to be? Man-At-Arms was all about the technology and the armor, he was never one of the strongest Masters. Like, I could see making Ram-Man or Roboto this size, but Man-At-Arms feels more like a "rich boy's pickup truck with those needlessly double-wide rear tires and a tall cap over the bed" kind of guy - you know, something simple with a lot of add-ons. This, meanwhile, is a six-wheeled troop transport or something. Weird!

Duncan has the same copper wheels as He-Man. The fenders on the left side

of the vehicle are yellow, while the ones on the right are green - matching the way Man-At-Arms just has the armor on one side of his body. The front grill matches that big shoop on his chest armor, and the exhaust stack on the side is shaped like his mace. The bottom of the ride is brown, like fur drawers and boots, and a band of blue above that is his belt. The body of the truck is a vibrant green, with some sculpted lines to suggest armor, and the roof plate is baby blue like his helmet. Plus, just like the vintage toy, there's nothing to make his mustache.