Most of the Home Rangers come from a homegoods store. Presumably. Their faction was introduced to the Transformers BotBots line too late to have info or maps any more, but we can guess. Today's, however, seems to come from the same store where you'd buy a typewriter, rotary phone, audio cassette, fax machine, or buggy whip.

Wow, an iron! How... '80s? Like, when was the last time anyone needed to use an iron for something? This isn't interwar period Britain. Between modern fabrics, 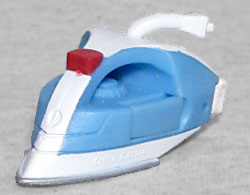 modern production methods, and modern cleaning processes, wrinkles are barely even a thing any more, and even if they were, who would care? Irons are something your parents or grandparents would use, and even then it's likely only because their parents started the habit for them. I actually remember the last time I used an iron: got new drapes and they'd been folded in the package; my mother was bothered by it for some reason, so she went to Walmart, bought an iron, smoothed them out, then returned it. Personally, I was aware that the folds would relax themselves away soon enough, but hey: moms, right? That was like 15 years ago.

BotBots are easy to convert. Here, you fold down a flap from the rear of the iron to create the robot's face, pull the arms out to the side and rotate them down, and bring the legs down so he can stand up.

For a neat bot like Heat Freak, the site [sic] of a wrinkled pair 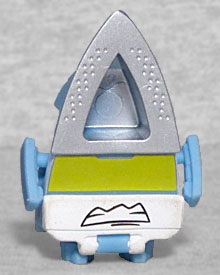 of pants or a crumpled sweater really gets him steamed up. He may be a hot head, but once he's had a chance to smooth things out, he's not so burned up about it anymore.

Puns, cute. Modern irons all have a way to stand up so they can be set down without burning everything, so you may have already seen the flat front of Heat Freak's forehead - or rather, not flat, since there's a big hollow in the middle (which would render a real iron fairly useless) to save plastic. There are some steam holes sculpted on here, though, so that's a nice touch. The eyes are just a single green visor, and his mouth looks like an angry grumble. The iron's plug becomes a tail that helps him stand, though it's balljointed if you want to move it around. 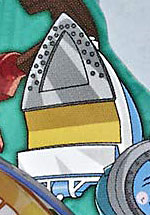 Heat Freak is available in a Home Rangers 5-pack, a Movie Moguls 8-pack, or a Wilderness Troop 8-pack.