This is the latest in a series (of indefinite length and regularity) of blog posts memorializing cancelled toys. Our figure today is The Mummy Minimates four-pack.

This set would have been part of Series 3 of the Universal Monsters Minimates line, alongside the Hunchback of Notre Dame figures. But the factory where they were being made fell behind schedule, so they chose to bump DST in favor of bigger customers; by the time production would have started, it would have been too late for the set, so it ended up cancelled. 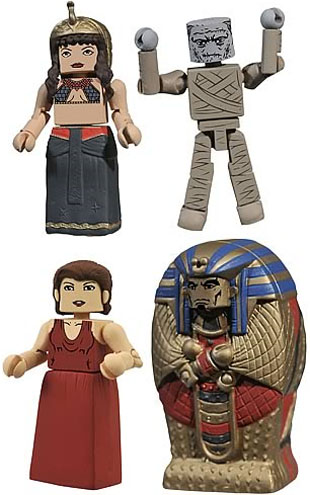 The one bright spot is that three of the four figures were available at Toys "Я" Us: Imhotep and his awesome sarcophagus in one set, and Anck-Es-En-Amon with an exclusive Frank Whemple, so technically only the Helen Grosvenor Minimate went unreleased. Still, if you were holding out to get the four-pack, you missed out.