Mace Windu and the Battle of Dantooine

Today's review talked about how Mace Windu was still part of the official story.

Clone Wars Chapter 13 aired on March 30, 2004. It saw Mace Windu on the planet Dantooine, trying to deal with the Separatists' seismic tank. Riding one of the tank's shockwaves, he leapt onto the side of its hull, and cut his way inside: 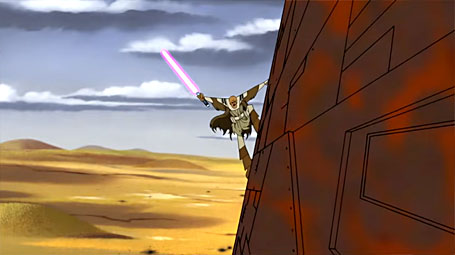 One month ago, July 27, Marvel published Obi-Wan #3, which featured several flashbacks to battles during the Clone Wars, including this shot of Mace Windu:

He's clinging to the side, he's wearing the same armor, and he's cutting a giant circular hole to get inside, just like he did in the cartoon. The story stands!

(Other scenes on this page are also from Clone Wars, so it's not just this one episode that's back in continuity.)

However, there was an even earlier reference to it. The The Clone Wars Season 2 episode "Brain Invaders" (aired December 4, 2009) saw Ki-Adi-Mundi arriving on Geonosis and reporting that

"I've just received a distress signal from our forces on Dantooine. Master Windu's defenses held, but at a great cost to his men. They need medical supplies immediately."

That was written specifically to refer to the 2004 storyline, because there really wasn't anything saying the old cartoon had never happened (other than a wiki's obsessive need to categorize everything as either "true" or "false." Because Star Wars loves dealing in absolutes). At this point it's safe to assume the entirety of Genndy Tartakovsy's Clone Wars is canon, unless it's contradicted by something that came later.

This entry was posted in addendums, comics and tagged Star Wars. Bookmark the permalink.