In some alternate reality, Disney had a character named "Donald Dog," whose family backstory was created and embellished by an artist named "Carl Quacks." 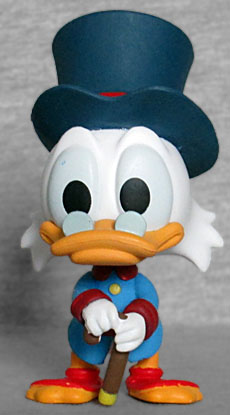 Scrooge McDuck first appeared in 1947's "Christmas on Bear Mountain," where he was an angry old miser, much in keeping with his Dickensian namesake. He was meant to be a one-shot character, but it was realized that he (and his money) would make a good hook for new stories, so only six months later, he was back again. By the mid-50s, Scrooge had become the central figure of the Disney Duck universe, displacing his nephew Donald - which is why, when Disney made DuckTales in 1987, Donald was nowhere to be found. 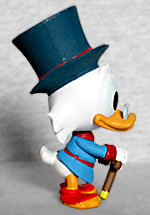 Scrooge is sculpted in a fairly simple pose, leaning on his cane - reminiscent of his stance from the DuckTales videogame. And yet, the figure still tends to fall over backwards, because of the weight of his top hat. You may have to boil his feet to soften them enough to tip

him forward a little. He's wearing his blue coat and red spats, rather than the Mirror Universe "red coat and blue spats" look. The brim on his hat is asymmetrical, for some reason, but he does get his spectacles molded on his beak. He's available in a 1:12 ratio, but only in the standard cases: the Hot Topic, GameStop and TЯU exclusive cases all drop him out (though Hot Topic does have a version of him swimming in a pile of money).