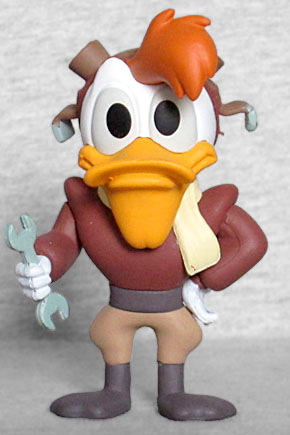 was Launchpad McQuack, Scrooge's pilot - as he himself says, "if it has wings, I can crash it!" He's a giant doofus, but incredibly sweet and good-natured (and is apparently quite attractive by Duckburg standards, because all the ladies seem to love him). He's a bit childish, getting along with the kids better than he does with adults, but despite his many absent-minded mistakes, he can generally be counted on to achieve any goal he's given.

Launchpad is one of the biggest anthropomorphic characters Disney has -

discounting things like giants and dragons, it's really just Launchpad and Pete at the top of the list. He has heroic proportions that would make him look at home in a Bruce Timm cartoon: skinny legs, big arms, huge chest, etc. He's even got a chin that makes him look ethnically half-pelican! Launchpad dresses like an old-timey pilot, with a leather jacket, jodhpurs, an aviator's cap and goggles, and a light scarf tied around his neck. A shock of orange hair sticks out from under his cap, and for this figure, he's holding a gray wrench - he must be making repairs on one of Scrooge's airships.