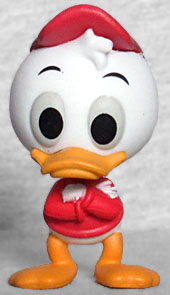 Huey, Dewey and Louie were created for a cartoon short, Donald's Nephews, but because of the time it takes to create a cartoon, they got "Renee Montoya'd" - that is, they showed up in the Donald Duck comic a few months earlier.

All three of the Mystery Minis triplets use the same basic mold (a-doy), but they're not identical: thanks to the way Mystery Minis are constructed, they get 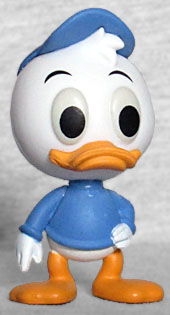 small differences beyond the to set them apart. That difference? The arms: each of the brothers gets a different set! Huey has his arms crossed over his chest, Dewey has one hand on his hip and the other hanging free, and Louie has both hands on his hips with his elbows sticking out.

(Their pupils and eyebrows are also painted in different spots on their faces, but that may simply be variation due to the production process, not a conscious choice. And since the boys are all white Pekin ducks, the eyes have 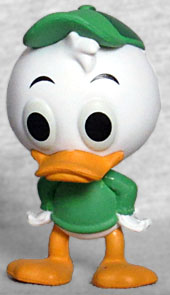 been painted a pale grey so they don't blend in.)

Huey, Dewey and Louie are each available in a 1:24 ratio, meaning that only two of them are in any given case. On the surface of it, that seems like a stupid idea, but if you think about it, it makes sense: Case 1 will have figures A and B, while Case 2 will have figures C and D ("D" in this case being Webby, also available in the same ratio); however, if you think about it again, it goes back to being stupid, because the standard cases all feature Chip and Dale in a 1:6 ratio, meaning both of them are in every box twice. Funko could easily have dropped one set of the chipmunks and put a full set of ducklings in every case.

When the nephews were introduced, they were rambunctious troublemakers

(after all, they were sent to stay with Donald after hospitalizing their father with a prank), but by the time they began interacting with Scrooge, they were more helpful and respectful. The difference? Joining the Junior Woodchucks. GameStop gets exclusive versions of the three boys, wearing their Junior Woodchuck hats and sashes, but the ratios there are even worse than the normal figures: Huey and Dewey are 1:6, but Louie is 1:12. They will forever be mis-matched! Who does that!? 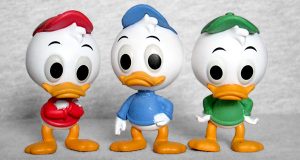 (If Funko really wanted to get creative, they'd have made a super-rare chase figure wearing black, instead of red, blue, or green, and called it "Phooey," the mysterious fourth brother.)