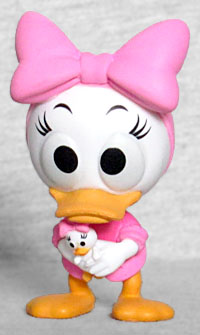 DuckTales introduced several new characters to the mythos - after all, a show about three young boys and their elderly great-uncle would be a bit sparse. So Scrooge, in need of a maid, cook, and a nanny for the boys, hired Bentina Beakley, who offered to work for room and board. And when Mrs. Beakley moved in, she brought her granddaughter Webby along with her.

Webbigail Vanderquack has always been typical of the era in which she was appearing - today she's an intense and obsessive girl with a penchant for grappling hooks [seen it --ed.], but in the '80s, though, she was sensitive and caring and even a little bit childish. 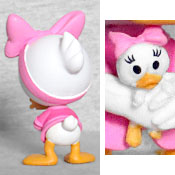 and has a gigantic bow in her hair. Well, around her head - ducks don't actually have hair. Okay, some Disney ducks have hair, but Webby isn't one of them. She still has the little ruff of feathers sticking out of the back of her head, but for some reason, it's just a single one in the center - since you could always see them no matter which direction she was facing, wouldn't it make more sense to assume she has two? Like Wolverine, if Wolverine were a tiny female duckling. In the cartoon, her eyes were blue, but here they're the same kind of gray as the boys'. She's also clutching her beloved Quacky Patch doll to her chest.