Alan Rails is a member of the Vindicators. 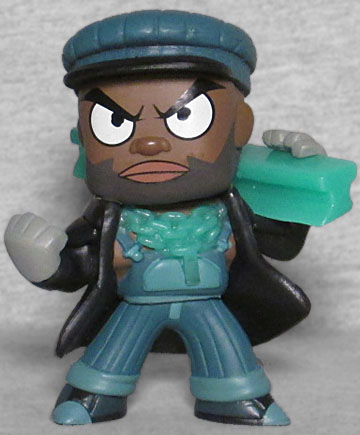 He doesn't play well with others, possibly because of his tragic origin; he uses his power responsibly (though it's also a burden to him) and never gives up. He's a hero!

Unlike the other Vindicators, Alan Rails' origin actually gets revealed: after his parents' tragic death in a railroad accident, he gained the power to summon ghost trains. How does that work? Yes. He wears a ghostly whistle on a thick chain around his neck, and when he blows it, a ghost train comes speeding through. Sure, why not? Maybe he's like Green Lantern, and just doesn't realize he can do shapes beyond trains? You know, like Hal Jordan and his damn giant fists.

Alan dresses like an old-timey railroad conductor, with an engineer's cap 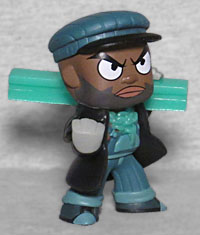 and a pair of overalls. He tops that with a black trenchcoat, though whoever was in charge of creating the paint master for the figure didn't realize his arms were supposed to be bare. Whoops! His face is painted with a furious look, befitting the temper he displays in the episode (he's voiced by Lance Reddick, who knows how to play scary/angry). He's got the most dynamic pose of any of these figures, with his legs spread, one fist raised, and a spectral railroad... rail... over his shoulder. The most awesome part, though? His ghost whistle and ghost rail are both cast from glow-in-the-dark plastic! Turn out the lights and he gets ghostly! And honestly, for the chains to glow, that means his entire body has to be molded from the stuff, then just painted over.

Alan Rails is a Hot Topic exclusive, but while the packaging claims he's available in a 1:24 ratio, the entire assortment is 1:12. You should be able to find him in one of the middle boxes - either left or right side, top or bottom layer. And he's pretty heavy, so identifying him is fairly easy.