The next time someone asks me to sign something, I'm just going to flash this toy at them.

The Fallout series takes place in a post-apocalyptic world where the nuclear paranoia of the 1950s bore fruit. Radioactive, radioactive fruit. 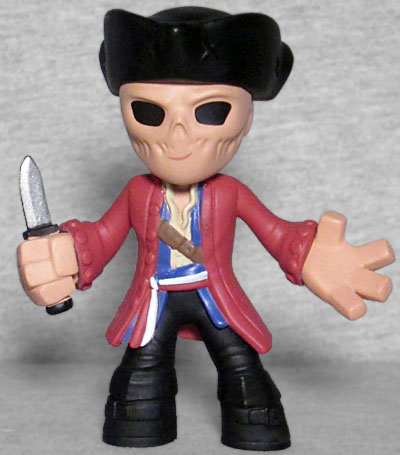 While portions of humanity were safe and protected inside their Vault-Tec vaults, others were not so lucky, mutating into radiation-fueled "Ghouls," basically Fallout's version of zombies. While some of them are mindless and feral, others retain their intellect - for instance, John Hancock.

Okay, no, this isn't "the" John Hancock, the founding father with the ostentatious signature and no other noteable qualities; this was just a normal guy living in Boston who got ghoulified after getting high on an experimental radioactive drug. After passing out, he apparently woke up at the Old State House, where he stole John Hanock's clothes and Major Thomas Melvill's three-cornered hat and renamed himself to get a new start on (un)life. 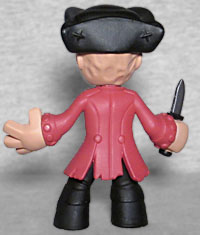 Johnny Boy is part of the Fallout 4 Mystery Minis - not to be confused with the Fallout Mystery Minis or the Best of Bethesda Mystery Minis. He's posed holding his arms wide, which would usually be a welcoming gesture, but he's got a knife in his right hand, so it's a bit more threatening than that. He has the wrinkly, desiccated look of the game's ghouls, with the sunken cheeks, blank eye sockets, and slightly lumpy head. His skin is an orangey shade, marking him as something definitely no longer human. He's painted with a tiny smile, because he's a friendly cosplaying zombie!