Now that McFarlane Toys is making, you know, toys again, Todd's really getting into the spirit. In addition to the licensed things, like DC or Fortnite or Doom, he's also started a new original property, Raw10, all about robotic animals. There are four figures to start with, available only at Walmart, and rather than aiming directly for the collector market, he's intending these to be fun for actual children. They're budget-friendly and blocky, but will they appeal to fans like us as a periphery demographic? Let's look! 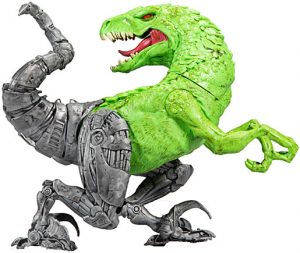 Raptar, and his wicked velociraptor brothers, were created in the top-secret Robotic Animal Warrior (RAW) labs. Combining ancient dinosaur DNA with advanced cybernetic machinery, the mad scientists in charge of RAW labs wanted to create the ultimate hunting party. The result was a trio of vicious beasts led by Raptar. Using linked intelligence coding, the brothers hunt as one, taking their commands from Raptar, and are capable of hunting any target over any terrain. Alone they are dangerous. Together, they are unstoppable.

So we're meant to buy three of this toy? That'll be disappointing, 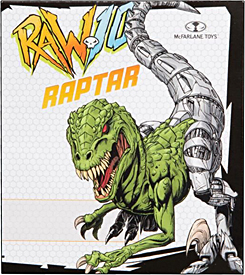 since it's so incredibly pre-posed. A raptor wearing robot-pants could be an interesting idea, but he's permanently looking back over his shoulder and you really have to use one of his arms to help keep him standing. There are a few joints in this, so he's not stuck forever in that one pose, but are they really of any use? Turn the head to face "forward," and the angle of the neck joint means he's looking at the ground. Adjusting the hips is pointless when he won't stand unless it's in a tripod stance. So we're left with, what, one arm, his jaw, and a couple joints in the tail? Not much fun! And the soft PVC used for the lower body means the feet will flex under the weight of the head. 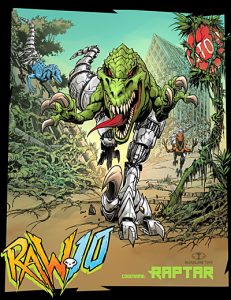 Raptar, and his brothers, Riptar and Randy, stalk the Lost Jungles! Their dinosaur DNA and advanced cyber-parts have [sic] them the perfect hunting machines.

However, this toy costs less than $10, and will be a ton of fun to bash into things, the way kids would do. The sculpt is as detailed as we expect from McFarlane, and though most of the colors are just big blocks of whatever shade, there's also a dark wash on the pieces to make the details stand out. A kid would find this awesome!

Each Raw10 release includes a pamphlet that features an image of them and their bio on one side, the bio for the other three figures on the other side, and then unfolds into a little poster of their "comic" art. Raptar's introduces and names his two brothers, and suggests that Todd is looking at potential repaints - raptors in blue and orange as well as this green. It also suggests that this is a post-apocalytic world, if the shattered buildings and uncontrolled plant growth is anything to go by.