As mentioned in today's review, everybody's favorite mechanized ape has been given several different origins over the years. 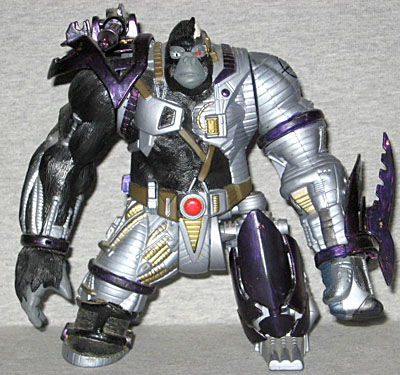 During the war years, governments tried to build super humans, and animals were used in preliminary testing. Experiments were never conducted on humans because the results with animals went grossly wrong. One of these animals, Cy-gor, experienced numerous problems. He now roams the earth with both parts of a human and ape brain in his body as powerful as a tank.

The story of Frankenstein gone bad...very bad. The largest most powerful silverback gorilla ever captured from the Congo. Sgt. Stephen "Smitty" Smith, assassin in training under he command of Al Simmons. Through a terrible act of a depraved doctor this creature and this man are genetically bound together through cybernetic operation. After escape Cy-Gor and his cybernetic companion Greystoke roam the countryside and skyscrapers searching or the scent of the only friend he knew... Al Simmons. But the scent has changed. It now smells of death. Cy-Gor's base emotions lead him to believe that this creature known as Spawn has killed Simmons. And for that Spawn must die!

Based on seminal fight scene artwork from Spawn #57, this two-pack allows interaction between our Hell-Born anti-hero Spawn and the cybernetically enhanced monkey Cy-Gor.

A cybernetically-enhanced gorilla with a mental capacity to rival Albert Einstein, Codename: Cy-Gor was a U.S. military experiment gone wrong. A beast removed from its natural station in life and turned into a living, thinking weapon, Cy-Gor went berserk during a field training exercise and escaped from the confines of the hidden lab which housed him (and others like him) - but not before killing 47 soldiers, scientists and civilians.

Cy-Gor is the pinnacle of the Robotic Animal Weapon (RAW) labs' science. He is the perfect combination of beast and machine. Designed as a test subject for RAW's newest cybernetic enhancements, Cy-Gor exceeded his potential to become RAW's greatest success. His brute strength is augmented with metallic muscles and his intellect, instincts and reflexes are perfectly-tuned with his built-in combat matrix. He was created to be a next-gen warrior. Now, the perfect weapon is on the loose and out of control.

Michael Konieczni was Al Simmons' friend and squad mate. When he discovered the truth about Al's murder, he attempted to blow the whistle on Jason Wynn. However, he was stopped and subjected to project Sim, the Simian experiments of Frederick Willheim and became the beast known as Cy-Gor, short for Cybernetic Gorilla.

Other than the two human names being different, it's not impossible to reconcile all the different origins into one cohesive whole: the various labs credited with his creation could have been nested inside one another like Russian dolls, with "Project Sim" being the ape-specific part of the Robot Animal Weapons, which was backed by the US military in a first step toward creating human supersoldiers, and though they all agree Cy-Gor somehow escaped captivity and is now on the loose, only the Adventures of Spawn one gives any details about it. So, alternate realities or one big happy? Up to you!

This entry was posted in addendums, lists, McFarlane and tagged Raw10, Spawn. Bookmark the permalink.