This guy hawflakes is posting his custom Xevoz designs so fast! I love it! Because I fell behind, here's a huge batch: 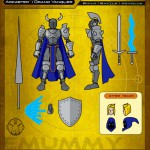 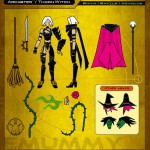 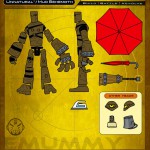 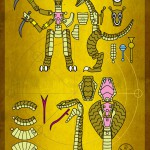 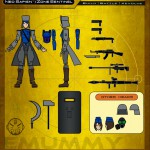 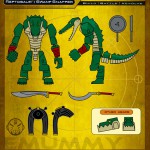 The nice thing is the way the first characters hit a few archetypal roles the real line didn't: a knight and a witch. Notice that they both have "palm-out energy blasts" like Runeslayer did, making that a racial feature for all the Arcasters. The witch may have been better with green skin, but one of hawflakes' stated goals was to design pieces that would be good for kitbashing, which means making them all as plain as possible. It looks like you could have the vines shoot out of her palm, too. The alternate heads are neat, but the broom is her best accessory.

The knight is pretty straightforward, but all the removable armor would have been nice to share with other Xevoz. The unmasked head fits the "upright paladin" style, while the hood is good for a spellcasting mage. Also, notice that all the Arcasters apparently have capes, too.

The Mud Behemoth could almost have been a Hyperfury rather than an Unnatural - a dirt elemental! His umbrella accessory makes sense, since a mud guy might get washed away if he gets wet. The cyclops head and the bucket aren't bad, and in case you can't tell what the joke head is, it's an ice cream cone - he's a choco monster!!

Wow, the Naga Charmer is brilliant! He can either be a four-armed snakeman with a solid chest, a two-armed snakeman with an opening chest, or a GIGANTIC snake! The design work that went into creating those multiple forms is outstanding. The thigh pieces become tail segments for the big guy, but the cobra's hood can also be a pair of wings for the biped! His weapons include a snake charmer's flute and a baby's rattle - and there's a rattle that can plug into his tail.

Zone Sentinel is a little Russian sniper girl. The weapons look a little too ordinary for the line, but there are a lot of them. And she doesn't have anything funny about her, sadly.

Swamp Snapper just proves that it's hard to design a crocodile man that doesn't look like Killer Croc. The black thing has kind of an Egyptian feel, and so do the weapons. But what's up with his funny weapon being a frying pan?