Back before Peter David took over the revamped X-Factor back in the '90s, Marvel's editors were soliciting ideas for the book from lots of creators, and Fabian Nicieza and Erik Larsen collaborated on a pitch: 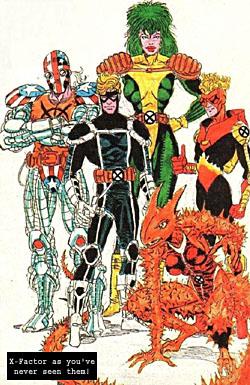 That guy on the left sure looks like SuperPatriot, doesn't he? That's actually Fabian and Erik's take on a guy named the Crimson Commando, a pre-existing Marvel character who first appeared in Uncanny X-Men #215. 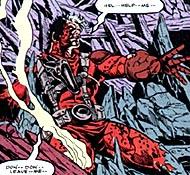 Crimson Commando (Frank Bohannon) was a fairly normal-looking guy, so if he was going to be turned into a crazy killer robot man, something would have to be done. Nicieza started the process in 1991 when, during a covert op in Kuwait, Crimson Commando lost an arm (New Mutants Annual #7) and both legs (X-Factor Annual #6) when the mission went south. Poor guy.

In January of '92, Erik Larsen took over Todd McFarlane's Spider-Man and immediately introduced a masked mystery man known as Cyborg X. Much of Cyborg X's dialogue was repeated from the last Freedom Force mission, suggesting that Bohannon was the one behind the suit. It wasn't confirmed, however, and Cyborg X seemed to die in an explosion by the end of the story.

By now, Marvel had rejected the X-Factor proposal, so when Larsen helped found Image Comics and started his own creator-owned comic, Savage Dragon, he took the Crimson Commando design with him and turned it into SuperPatriot, who debuted in issue #2 in October of '92. 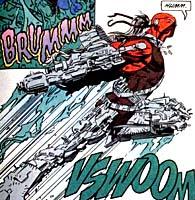 But comicbook death is never final, so the Crimson Commando/Cyborg X wasn't finished yet. He showed up in a new costume in 1993's X-Men Annual #2, in a story written once again by Fabian Nicieza. Now known only as "Commando," the character even had a figure from ToyBiz in 1994, beating McFarlane Toys' SuperPatriot to shelves by two years, and ToyBiz's SuperPatriot by 13!

This entry was posted in addendums, comics, Marvel and tagged Legendary Heroes, X-Men. Bookmark the permalink.