Remember a few months ago when we showed you that Xevoz control art, with those tantalizing peeks at figures we'd never get to see? We get to see one now! 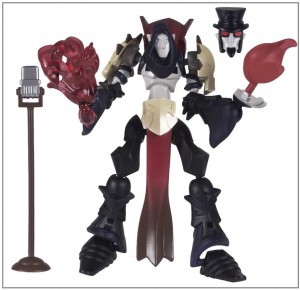 This photo, provided by Xevoz designer Ben Hitmar, proves that the figures were

further along in development than we thought! Warlock, here, would have been a basic release Arcaster (though "Warlock" is a pretty plain name, and probably would have been changed to something more inventive before release). He has a big translucent "magic" hand with an articulated thumb, and a burst of energy that would plug into his hand. The evil skull faces on his legs, belt and shoulder pads make him look more like a necromancer - and that big goofy Dracula collar that plugs into his back isn't helping anything! The alternate head, with its sideburns, goatee, sunglasses and Ω top hat, is quite stylish. His joke piece would have been a microphone? I don't get it, but okay.

I am massively disappointed that Warlock will never be released!