A new Captain America for a new generation of heroes, 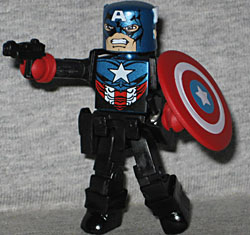 the presumed-dead James "Bucky" Barnes has returned from years of isolation as the Winter Soldier to carry on his former mentor's legacy.

Bucky Cap's costume is looking good in Minimate form. His blue is nicely metallic, and the black on his limbs is completely undetailed - they didn't try to force muscles on there. Of course, they made up for that on the abdomen, where the thin black lines almost overpower the red and white stripes. He has folded boots, and rings around his wrists to suggest his short gloves. He's got a utility belt, and a harness around his shoulders where you can plug his shield when it's not on his arm.

Since Bucky was more martial than Steve Rogers, he arms himself with a gun and a knife - they both fit into the belt. You can remove his mask, and replace it with short brown hair. The expression on this face is much less angry than the one on the head cap - maybe his mask pinches, or is itchy? You know that would make you angry if you had to deal with it. 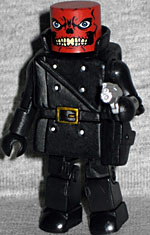 Captain America's unyielding nemesis since World War II, the Red Skull's determination to survive is unparalleled. Hidden within the mind of industrialist Alexander Lukin, even Captain America could not stop his evil schemes this time...

Well well well, a Red Skull Minimate! This isn't the first one - it was beaten to market by only a few weeks by a "Marvel Villains" box set - but it's certainly the best. His bright red head contrasts wonderfully with his black uniform, there are silver buttons down his chest and a large golden buckle on his belt. He's armed with a silver pistol that fits into the holster molded onto his coat.

hidden surprise accessories into the Minimate sets (cf. Transformation Venom and the Blob), and once you open the box you'll find a second chest cap for Red Skull - this one a plain suit jacket with a white shirt and a red necktie, allowing you to create the less military, more civilian look he had in the '80s and early '90s. His hands are still black, of course, but surely you can find him some other Minimate hands if you want him to be un-gloved.

Bucky Cap was also available in a Toys Я Us two-pack (with the AIM Scientist, of all things), but you could only get the Red Skull at comicshops. That makes sense, but it's a shame that most folks will miss out on him.