A former clerk at a law firm, Andrea has been with the group since 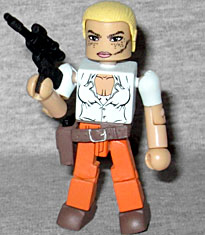 the beginning, when she, Dale and her sister Amy lived alone in the RV. Over time, her uncanny skill with firearms has made her an invaluable asset to the group.

Andrea first appeared in issue #2 of the comic, and became one of the major characters. This version is taken from the group's time at the prison - as evidenced by her orange pants and the trademark scar on her face - and she looks furious. If we had to narrow it down to a specific issue, we'd say this was from her Big Damn hero moment in #47: she's got the revolver holstered on her hip, her hair pulled back in a ponytail, and also comes with her Anschutz .22 LR sniper rifle. 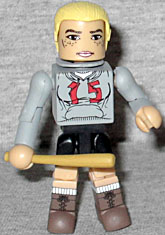 College student Amy was returning to school with her sister Andrea when their car broke down. Picked up by Dale in his RV, they became the core of a group of survivors, until their campsite was attacked and Amy was killed.

Poor Amy. She's the first human to die in the series, then she had her face stolen by her sister. Okay, not really. This image sums it up nicely, but the short version is that the way Andrea looked early in the book is different from the way she looks later in the book, and her later appearance is functionally identical to Amy, leading some people to conclude that the artist got confused about who's who, and rather than "fix" it after a few issues, they just went with it.

Amy is wearing her grey hoodie, black shorts, and tall brown boots. She's armed with a bat, and has the same hair piece that Andrea had. The figure also includes a second head with an alternate face that accurately re-creates her a-zombie-just-bit-my-neck "YEARGH" face, as seen in issue #5. For maximum accuracy, there's also a second, bloodstained hood.

Survival Tip: Stabbing a zombie in the head through a chain-link fence sounds good on paper, but if you're not careful you can lose your knife, and even injure 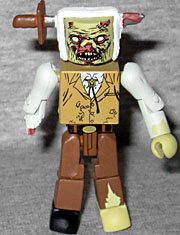 your hand. Inserting your knife into a block of wood keeps it safe.

That "tip" is very specifically about this zombie: he appears on the first few pages of issue #20, where Glenn is doing exactly that with a knife. In fact, you think that's a sword though his head? It's not. It's a long knife jammed through a block of wood. The colors are weird: in the comic, he had black hair and was wearing a black suit jacket; on this Minimate, the hair is white, and he's wearing a mustard yellow vest. Huh? We can accept the wounds on the face, and the lack of an arm (it was never shown in the book), but why change the colors so drastically? Because of the way variants are handled, we end up with two Stabbed Zombies; would it have been so expensive to repaint one correctly?

Andrea's change in appearance has never been addressed in the comics, but it's easy enough to handwave: in the early days of the outbreak, she was still concerned with her appearance, so she took good care of her hair and wore makeup to hide her freckles; as time went by, she realized how foolish that was, and adopted a more "natural" look. There ya go, simple! Having two mis-colored Stabbed Zombies may not be great, but if you get both Harrison sisters, you can customize one of the zombies yourself.
Previous | Next