A lawyer and mother of two, Michonne lost everything 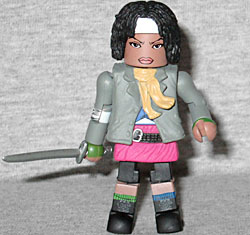 in the outbreak. To escape from her zombie-surrounded home, she put collars and chains on her dead boyfriend Mike and his best friend Terry, and was able to pass unhindered.

This figure is clearly based on Michonne's first appearance on the cover of issue #19. She's wearing a green jacket, yellow scarf, white shirt with blue vest, a pink skirt, black capri pants, and black boots with one green sock and one blue sock. Her hair is a new piece that doesn't sit down as far on her head as you might expect, and improbably, the pattern on her skirt is sculpted in rather than being painted. As you'd expect, she's armed with her sword.

Survival Tip: Zombies do not attack their own, so traveling with a pair of disarmed zombies is one way to go unnoticed. Smearing yourself with the rotted innards 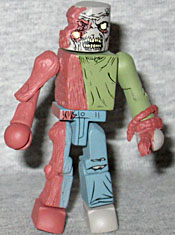 of a zombie is another way, if you can handle the stench.

This zombie comes from the same issue as Michonne - he's one of the ones the survivors shoot while clearing out the prison. All that's ever seen of him is his head and shoulders, so the entrails wrapped around his left hand and the fact that the entire right side of his body looks like beef jerky is all invented for this Minimate. Weirdly, the designers seem to have drastically misinterpreted the source artwork: the thing that is meant to be an eye hanging from his ruined head is instead here a hole molded down into the face. What the heck is that about? The head, torso, right arm, left hand, and right leg are new pieces, molded with their damaged textures.
Previous