This is the latest in a series (of indefinite length and regularity) of blog posts memorializing cancelled toys. Our figure today is Kenner's R-Zor Warrior.

In 1994, Kenner had plans to add "Predator Hunters" to the ranks of the Space Marines, using characters from the first movie. Previews magazine even had a product listing that named Dutch, Hi-Tech Dutch, Blain, and Big Knife Billy. Part of that sub-line would have been the figure possibly known as R'Zor, R-Zor, or Razor Predator. Rather than being an actual Pred, this would have been a human in a specialized suit, serving as a counterpart to the ATAX Armor. 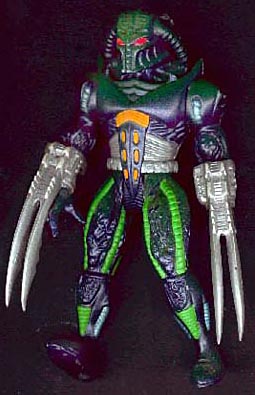 That's a hand-painted sample, because the toy never got far enough into production for any other kind of sample to exist. The big silver arm blades would have been removable, and if ATAX was anything to go by, the helmet would have been as well. The Predator Hunters were cancelled altogether after slow sales of the previous Space Marines assortments.

This entry was posted in cancelled toys, Kenner and tagged Alien, Predator. Bookmark the permalink.