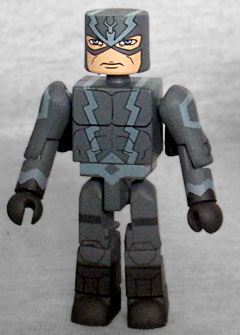 abilities by the Terrigen Mists. Even the merest whisper from his lips is a highly destructive force.

I will never get over the fact that Black Bolt's real name is "Blackagar Boltagon." It's just such a perfect encapsulation of the goofiness of comics, both good and bad. It's been seven years since we've had a Black Bolt Minimate, but as a Walgreens exclusive, this one is based on the Avengers Assemble cartoon, not the comics - rather than a black costume with silver, his costume is dark grey with the accents done in darker and lighter shades. It actually looks really cool, too! It keeps Black Bolt's traditional lightning bolt patterns, complementing them with some new geometric lines, and even though his forehead tuning fork is no longer a molded element, it's still present. His upper arms are new pieces, molded with tiny wings rather than using separate pieces; we've seen Spider-Men with similar things, but these aren't the same sculpt.

The figure includes a second head, with its mouth open, and you know what that means: he's using his powers! The front of the packaging calls out the inclusion of a "sonic scream accessory," which may be the first time one of those blurbs has pushed me over the edge from a "maybe" into a "buy."

The Queen of the Inhumans, Medusa was given long, 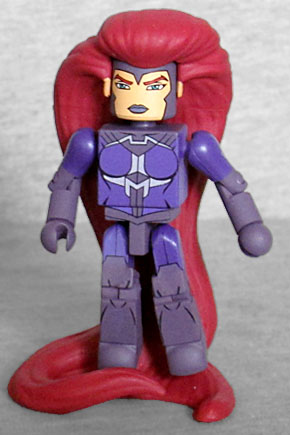 prehensile hair, which can obey her commands and even carry her from place to place.

Medusalith Amaquelin has never had a Minimate before, so it's unexpected that Walgreens would get her first - of course, they're still the only place to have a Man-Thing at all, and he used his fair share of big new pieces, too. Medusa has the standard Minimate body, but her gigantic hair is a new mold. Presumably we'll see a comic-based Medusa at some point soon, then? Or even maybe a box set based on the TV show? Her stint as a fill-in member of the FF? It doesn't seem like there's any way this will be a one-time use. The hair is long enough to lift the figure into the air, and has a big enough base to remain stable. Rather than a plain purple bodysuit, animated Medusa spices things up visually by changing the shade of her boots and gloves, and adding a little bit of detail on the chest that may be armor? Or even if it's just a patterns on the cloth like her husband's lightning bolts, it breaks up the giant field of purple and keeps the toy from looking dull. She also wears purple lipstick, while in the show, her lips appear to be the same color as her hair - this is a neat change, however!