What a difference a decade can make! 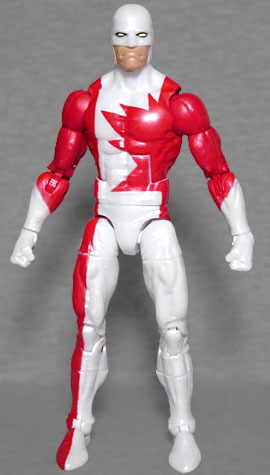 Donning the maple leaf symbol of his home, James Hudson suits up in advanced battle armor and protects the Earth as Guardian.

Hasbro made an ML Guardian before, but it was... fully mediocre. At least reviewing it allowed us to teach you about batch molding, so that's something at least? This figure still uses one of Hasbro's stock bodies, but any company that would create 100% new molds for a character like Guardian is bad with its money. Whoever was in charge of approving the paint deco didn't do a great job, because this just looks like random spikes, not a maple leaf. Considering Guardian's strongest point is his graphic design, this is a real fail!

He does get a new head, and it's got a bunch more personality than you'd expect. Look at that big exaggerated frown on his face! That's, like, Batman levels of frowning! The toy's white is actually white this time, without the blue shadows they tried to give him last time, but the red on his forearms doesn't match the red on the rest of the suit.

There are no accessories, but we do get a lot of the Wendigo Build-A-Figure: the torso and tail. They're separate pieces.

Guardian is a huge upgrade over the last figure. And with the recently announced Alpha Flight box set, he's soon going to have a bunch of friends to hang out with.