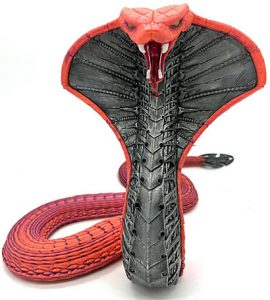 Battlesnake is the product of mad science. Fusing reptile DNA with radical cyber-technology and self-powered Ion Core Energy systems, the engineers in the top-secret Robotic Animal Warrior (RAW) labs created a true monster. Possessing genius-level intelligence and futuristic combat programming, Battlesnake can hypnotize his prey before striking with his piercing "techno fangs." His super-steel underbelly and reinforced hood protect him from attacks, and his sinister mind makes him a threat to all living things.

Battlesnake! BATTLESNAKE! How has no one ever jumped on that name before?! 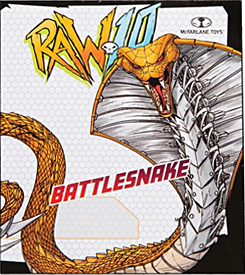 It's like a rattlesnake, but for battle! The detailing in both the dorsal scaling and the ventral robotics is above what you'd expect from a kiddie toy like this. In a fun Easter egg, the fake eye-spots on the back of the snake's hood resemble the typical "Spawn eyes" logo (they just need to hook up a little more at the corners). There's an axe or something at the end of his tail instead of a typical rattle, and a bluish wash on the end of the body helps bring out the details of the intricate scales. If this were just a little more red instead of orange, it'd be an amazing piece of scenery for Cobra Commander or Destro to pose in front of! Battlesnake's jaw moves, and his tongue can extend slightly. 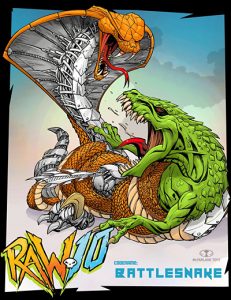 Battlesnake, protects his jungle from the dangerous claws of Raptar. Battlesnake squeezes the robo-dinosaur and prepares to unleash his Hypno Gaze before Raptar can strike!

This is another $10 toy, all curled up in the (open air) packaging, but can be stretched out to play with him. The head is solid plastic, but as you move down the body it transitions into that typical kind of stuff any rubber snake toy you had as a kid would be made of. That does seem a bit dangerous, as a child playing with this will inevitably turn it into a swinging, springy weapon. There are no wires or anything inside it, so while you can stretch it out or wrap it around other toys, it will eventually just spring back to its intended shape.

Each Raw10 release includes a pamphlet that features an image of them and their bio on one side, the bio for the other three figures on the other side, and then unfolds into a little poster of their "comic" art. Battlesnake's shows him in a deadly battle, and makes it clear why having an armored underbeally is so important.

This entry was posted in blog exclusive review, McFarlane, Walmart and tagged Raw10. Bookmark the permalink.