Today we reviewed Hasbro's mailaway GI Joe Generation 3 Doc exclusive. The character has been part of the line since 1983, and since this is only his second-ever figure, he's always worn the same uniform.

However, when Ron Rudat was designing the character in late 1981, he originally had a different appearance, with a vest that has various pouches and a holster, short sleeves, and various red crosses on his gear and helmet: 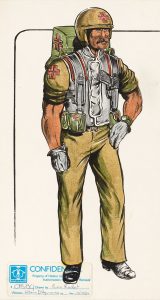 The same style of vest was used for Airborne, just with more stuff sculpted over the top of it, but this is still a unique look for Doc.