The Leader is pretty much the classic Hulk villain. Sure, there's 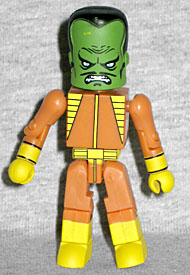 Thunderbolt Ross and his squad of Hulkbusters, but when you're talking "villain" villains, you want something a bit more exotic than a bunch of generic Army guys, right? Sam Sterns was a high-school dropout working as a janitor when he was blasted with Gamma radiation and gained super intelligence. The Leader wasn't the first Minimate to get new bodyparts - that would be Thing with his big rocky mitts - but he was the first to get a new head. When the figure was first seen, we all assumed the giant forehead would be a piece added to the top of the standard Minimate block, but nope, it's all one solid piece. He has a delightful face, and the yellow areas of his jumpsuit are outlined in black; that was a good choice, because the paint is a bit sloppier than we like to see, especially on the gloves and belt. 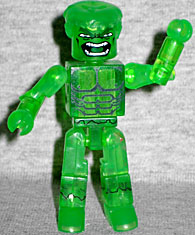 This set was released in Series 6, and this was already the third Hulk figure they'd put out: the first was available in Series 1 with a Bruce Banner Minimate, while the second was an SDCC exclusive. This version, "Gamma Hulk," is cast entirely in translucent green plastic. He's been painted with the same face and musculature as the Series 1 Hulk, but the outline of his torn pants is unique. He does have the same hair piece, as well. Since there's no more paint to talk about, this seems like a good opportunity to mention a flaw common to all Minimates: the right leg is shorter than the left. 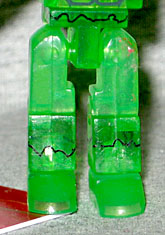 It's not a huge difference, but when a Minimate is standing straight up, there's a visible difference of about a millimeter or so. It doesn't sound like much, but when you're talking about a 2" action figure, that's 1/50th of the total height. On a 6" figure, that would be the same thickness as three dimes. If you were 6' tall, that would be a difference of approximately 1½" - there are people whose legs aren't even that far apart who still have to wear special shoes to make up the difference. I've noticed the difference on current Minimates, but going back to review Hulk, I see it's been there for ages. Basically, your only choices are to leave a gap between the foot and the leg, or have your Minimates leaning permanently to the side.

Anyway, there have been plenty of other Hulks, including another trans green "Gamma" version, but this is still the only version of the Leader. If you want him to threaten your other Minimates, this is the only way to do it.